Statues, an admirably heavy and technically precise chaotic metalcore band from Perth, Australia, represent a problem, and it’s one that they share with a lot of bands operating within this crowded sub-genre. That problem is a lack of their own ideas. Quite honestly, it’s a big problem to have as a technically driven band: by design, it’s a genre that lives and dies on fresh ideas, on the ability of its songwriters to offer up something new. To pepper each song with countless twists and turns, numerous shocks to the system and a feeling that you’re never quite sure what’s coming next. Once you can plot ahead when listening to it, this type of music just loses its edge. If you know what’s coming, the element of surprise is gone and the band has had the rug pulled out from under them before they’re halfway through their first song. Unfortunately, Statues exemplify this problem perfectly.

It’s no mean feat to be a metalcore band at this stage in history. It can’t be easy to offer up something different from those that have gone before; to put a fresh spin on something so well worn. But it is possible. You only need look to Seizures‘ The Sanity Universal LP from 2013 to hear a band firing on all cylinders. There’s a band who seemingly have more ideas than they can cram into 60 seconds of running time let alone a full length LP. In the case of Statues’ Together We’re Alone, which is their début LP, it feels old before you’ve even played it all once.

It’s a tricky one, then, trying to review it. Because what’s here is good. It’s ok. There’s nothing particularly wrong with it. Nothing exceptionally offensive. But then there’s nothing daring either, no risks taken. No sense of identity. It could be any band. What makes it Statues? Their influences are clear but they do nothing to use what they’ve learnt and try and better it. If you’re releasing a laser-precise (which it is) and admirably complicated (which it also is) metalcore record in 2014 it needs to have more seething fury than Norma Jean. Which it doesn’t. It needs to pull off a more reckless sense of abandon than Every Time I Die. Which it doesn’t. It perhaps also needs to have as much confidence as a band like iwrestledabearonce, who might not be to all tastes, but certainly know how to pack a record with surprises. But, again, it doesn’t. 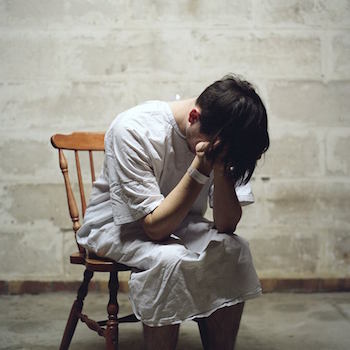 Together We’re Alone is… fine. It works. As an LP it hangs together nicely for the most part. Tracks flow well and it flies along at an enjoyable clip, with songs like ‘Burning The Truth At Both Ends’ demonstrating how Statues have got it nailed; the elastic push-and-pull of the heavier sections underpinning the moments when they get all fiddly, with Jayme Van Keulen’s vocals providing a solid, bellowing backbone. It’s unfortunate that the moments when they do think outside the box stand out for entirely the wrong reasons; the vocals-and-hand-claps only ‘I Want Peace’ and the slide guitar blues jam ‘Hope Is’ feel roughly inserted, breaking the flow which they did a job good of building up, and not really feeling like a part of the whole.

Those interludes aside, everyone is doing what they need to do, and doing it well. Tab A is inserted into slot B. If we were to do review scores here at Broken Amp, Together We’re Alone would be a solid six out of ten; better than average but not by a lot. If you’re a fan of stuff like this then I’ve no doubt that you’ll like Statues, but just don’t expect to be left with much of an impression.

Made in England. Incredibly fond of writing about music that features riffs and blastbeats and screams and a sense of despair.