Trending
You are at:Home»Interviews»Steffen Kummerer of Thulcandra: “‘Clone–ism’ does not pay justice anymore.”
By Dan Jackson on June 8, 2015 Interviews

Bands that take liberally from legendary heavy metal bands when forming their own sound are obviously very common. Whether you’re talking about the throngs of Black Sabbath sound-a-likes or bands that try their damnedest to recreate Darkthrone’s classic Peaceville-era black metal years, they’re prevalent across every subgenre you can think of. For some people, the idea of creating a band that sounds so similar to an established, beloved band is offensive or at the very least unnecessary. For others, they’re just glad to have a band making use of a style they enjoy, especially in an situation where the band being emulated is either not around, or doesn’t care to create more music in that particular style anymore.

Starting with their 2010 début Fallen Angel’s Dominion, Thulcandra has made a name for themselves by creating albums that painstakingly recreate the sound of Swedish black metal icons Dissection, specifically their first two albums. 2011’s Under a Frozen Sun is as close to matching Dissection’s majesty and melodic genius as anyone is ever going to get without travelling back in time and stopping Jon Nödtveidt from committing his horrific crimes, in hopes that in addition to sparing the victim’s life [1] he might have made another album or two with that sound, rather than 2006’s truly under-appreciated, though very different Reinkaos.

Having already released two albums that might have better sated people who wanted either The Somberlain or Storm of the Light’s Bane Part 2, it makes sense that Thulcandra would take strides toward broadening their sound, to give the band more freedom to try new things. When I asked Steffen Kummerer, the band’s guitarist, vocalist and primary songwriter, whether expanding the band’s stylistic horizons was the goal from the outset of making the album, he made it clear that it wasn’t something they spent a lot of time worrying about:

“The whole album tracks came together quite naturally, without too much thought about the direction we are leading into. Thulcandra plays in a very thin and common musical direction with clear outlines and vision of where to go. Of course, the similarities to Dissection are still there and, looking to the cover artwork, obvious. On the other hand, Ascension Lost is our third record to date and we never wrote the same album twice. It feels like a natural evolution with keeping respect to the roots where we come from. I guess especially the numerous twin guitars lightened up the arrangements a lot and let other influences shine through. We write music in the vein of the early 90s, so why trying to include prog or old school black metal that doesn’t fit just to show off something new? ‘Clone–ism’ does not pay justice anymore since the metal scene is so conservative that the majority of their fans don’t want to hear anything new. Ask any Slayer fan for his favorite album. There you go. Reign in Blood or South of Heaven.”

The last example cuts to bone of the matter rather precisely, at a time when metal is struggling to discover new musical frontiers. You’re not likely to find many people that will tell you that any new stylistic ideas are inherently bad ideas because, using Steffen’s example, South of Heaven is at least somewhat different from Reign in Blood. ‘Silent Scream’ is uglier and more dissonant than anything on Reign in Blood, and the title track is more measured and foreboding than Slayer’s standard fare to that point. Instead, Steffen is arguing for gradual and rational progression when many bands elect to become something else entirely, an artistic decision that is often wrongly mistaken for maturity.

We’re all fans of bands that got it just right at a certain point in their career and then preceded to stray from that sound and come up with something less compelling. Some bands find that sound again and it leads to some of the best material of their career, as is the case with latterday Napalm Death or Carcass. Others, like Metallica, find themselves creatively fulfilled, but constantly feel the need to play the game of offering some small hope to fans of their older material, while pretty clearly not actually rewarding that hope. With so much of its fanbase being openly resistant to excessive change, it makes some sense that in turn, heavy metal as a whole can at times be more interested in exploring the past rather than creating the future:

“There are always trends looking backwards and every hype is coming back after a certain circle. The thrash movement, stoner and 70s bands, now the doom explosion and old school heavy metal groups. It just underlines my statement. If you play in a certain style, try at least writing something that sounds like yourself, even if you write music like your idols did 20 or 25 years ago. Get your own musical handwriting within the songs and love what you do. There is no disadvantage or advantage from my point of view.”

It’s hard to argue against a band having conviction and passion for what they’re doing, whether they’re a “clone” band or if they’ve carving out a truly unique niche for themselves. As for Thulcandra, Ascension Lost sees them occupying the space in between. Things are noticeably different in that the stylistic devotion isn’t omnipresent. Listening to ‘Sorrow of the One’, the song opens with pensive clean guitar that sounds unlike anything Dissection or other early devotees every came up with. One might place it as something you’d hear from Opeth during the Damnation/Deliverance period, until the rest of the band bring the song into more familiar territory. 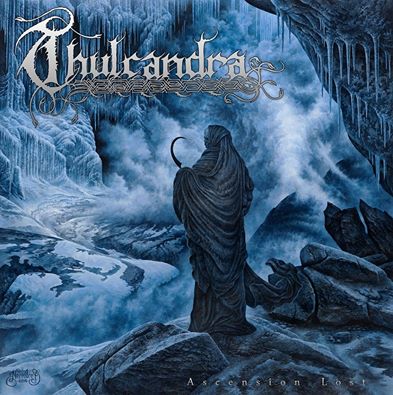 One of the other noticeable changes from Under a Frozen Sun to Ascension Lost is in the drumming, which seems to be a bit more adventurous and colorful. It’s unfortunate then that this is to be the last Thulcandra album to feature Seraph, also of fellow German band Dark Fortress. Given how natural and smooth his performance is, it was surprising to learn just how rigidly mapped out the album and recording process was:

“We indeed wrote the full album prior entering the studio and made a pretty detailed pre-production, including drums. With this lineup and the musicians we play for many years together and know where each other’s talents are, so we wrote this album to let the drums shine through with a lot of room for the individual instruments. With the pre-production, Seraph was able to put more work into details and worked out more ideas than on the previous albums. Also, the recordings went smooth, having every tempo and beat prepared to the maximum upfront.”

Speaking of differences and also of preparation; it’s worth pointing out that Steffen holds a position with similar duties in progressive technical death metal band Obscura, which is quite a stylistic contrast. When looking at how he goes about writing for each band, it seems that the approaches are understandably different:

“It is hard for me to compare both bands on songwriting since both groups are based in different scenes and musical styles. I like the balance of having the opportunity to write laid back death and black metal with a rock vibe, where feeling is the most important part, and going over the edge in multiple ways with Obscura, composing progressive and complex songs with rhythmically and harmonically demanding structures. While it takes a while to come up with new ideas for Obscura, Thulcandra needs time to get into the right mood to write.”

With mood being so important to the creative process for Thulcandra, it’s worth exploring listening habits that might achieve the right headspace. In this regard, Steffen offered some insight as to why he tends to listen to melodic black metal and death metal like Sacramentum, older At The Gates and Unanimated in relation to Thulcandra as opposed to the more dissonant and darker bands like Deathspell Omega or Ondskapt when seeking to conjure that mindset:

“Harmony and songwriting are important for me, so for my taste Ondskapt or Deathspell Omega don’t give me too much to stay interested longer than a few minutes. It is a matter of taste, something you cannot discuss. With melodies and accessible arrangements you might find the music easier to understand, but that does not make anything better or worse.”

So having looked at the past, both decades old and months earlier, what’s in Thulcandra’s semi-immediate future? Obscura hit the studio in April, for an album due out late this year, is Thulcandra on break in the meantime, or can the world look forward to more live dates or even tours?

“With Erebor (Secrets of the Moon) we have a new drummer, and with that being able to play more live shows in general. We are looking for the right tour to promote Ascension Lost to a broad audience, but it seems hard to find the right touring partner at this time. Obscura are right now in the studio tracking drums [as of April-Dan], so it might take until the end of 2015 or early 2016 to have a new record released. By then we will tour around the globe again, while Thulcandra might have a few spots to perform on festivals.”

Having witnessed a Dissection show in Tijuana, Mexico not long before Jon Nödtveidt’s death in 2006, I feel qualified to say that if Thulcandra’s ability to channel that classic Dissection sound in the studio is any indication of their ability to elicit the same fervor that Dissection did in a live setting, those potential festival appearances will be absolute must-see performances.

Our thanks to Steffen for his time, and Andy for the opportunity.