Trending
You are at:Home»Reviews»Metal»Sylvaine – Wistful
By Stuart Wain on May 17, 2016 Metal, Reviews
Band: Sylvaine
Album: Wistful
Record label: Season Of Mist
Release Date: 13 May 2016
Facebook
Purchase/Downlaod
Tracklisting:
1. Delusions
2. Earthbound
3. A Ghost Trapped In Limbo
4. Saudade
5. In The Wake Of Moments Passed By
6. Like A Moth To A Flame
7. Wistful

The idea of ambient metal might initially seem a strange one. After all, metal generally is defined in large part by its volume, aggression and intensity. Think of your archetypal metal bands – the likes of Iron Maiden, or Slayer. Neither of them could ever be described as ‘ambient’. So, that Norwegian artist Sylvaine makes use of the ambient metal genre tag is interesting enough in itself; yet it doesn’t tell the full tale of her second album, Wistful. The seven tracks on the album form a body of work that is absolutely beautiful and atmospheric, with the power to take the listener away from their surroundings to some place else. Wistful is no mere metal version of Brian Eno‘s Music For Airports [1] – it is cathartic, captivating and possessed of an unusual power, with the ability to refresh the listener’s energy after overcoming the ordeals of the daily grind.

There are a lot of different influences at play in Wistful. There’s a good dose of post-rock and post-metal, giving the music a strong sense of dynamics, running through peaks and troughs of volume and intensity. Likewise, the influence of shoegaze – and shoegaze-influenced bands, such as Alcest [2] – is strongly evident. These influences give the music its beauty, with clean guitar lines and hauntingly soft vocals present throughout. The way many of the songs move and progress also plays in to this, with ‘A Ghost Trapped In Limbo’ being a prime example, Sylvaine’s heartfelt clean vocals soaring above a musical background that is both hopeful and slightly sorrowful. 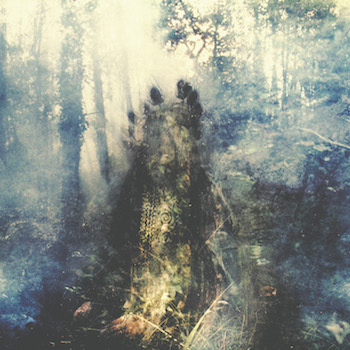 What’s also readily apparent is the influence of black metal. As well as her undeniably beautiful clean vocals, Sylvaine also makes use of a very strong, raw black metal shriek at points, which gives tracks such as ‘Earthbound’ an added sense of force, even if they never quite risk becoming violent or entirely losing their sense of serenity. It’s possible to draw a comparison to Myrkur, as both artists create music influenced by black metal and wed it to more beautiful, non-metal sections and playing styles. However, Wistful has a stronger post-rock and shoegaze feel than anything Myrkur has done, but one can imagine fans of one artist are likely to enjoy the music of the other. I will stress that this is not due to both Sylvaine and Myrkur being solo female musicians who, to greater or lesser degrees, make music that falls within black metal – comparing them simply because of gender is sexist and insulting to both musicians, whilst ignoring those solo female black metal acts who make very different music (such as Adore [3], Anguished [4], Uncanny Reality [5], and Oizys [6]). After all, no one would sensibly state that solo male black metal acts, such as Leviathan [7] and Tjolgtjar [8], all sound the same.

That’s not a statement that can be levelled at the songs on Wistful, either; but what’s remarkable is that the overall character and flow of the album is so consistent. It’s in this sense that the ‘ambient metal’ tag makes sense – if the intent of ambient music is to emphasise atmosphere over traditional structure or rhythm, giving space to think without the music forcing itself on the listener [9] then Wistful certainly meets that criterion. It is an album to sink in to, to listen to with minimal distractions, perfect for daydreaming and letting yourself simply be. It might be argued that such aims are inherently un-metal, but this opens up a whole host of further, potentially uncomfortable questions (what about drone metal, or hypnotic black metal?). No, it is better to simply ignore such concerns, because that is not what Sylvaine is trying to achieve. Don’t ask yourself ‘is this metal?’, because it’s an irrelevant question. Ask yourself, ‘does this album achieve what it sets out to do, which is to be beautiful, cathartic, and emotionally refreshing?’ The undeniable answer is yes. Over the past few weeks, I have found myself listening to Wistful to an extent that is almost unhealthy, such is its addictive power and cleansing qualities. It may not always be what you need in your life, but for moments when you need something heavy on substance and emotion rather than volume, Wistful is strongly recommended.

Footnotes:
1. Brian Eno’s Music For Airports, whilst not the first example of ambient music, is perhaps the best known, and the first album to be explicitly created as such.

2. It is worth noting that Sylvaine previously supported Alcest in South America in September 2014, and is due to play an acoustic show with Neige of Alcest on 18 June 2016.

9. This description of the intent of ambient music is largely taken from Brian Eno’s comments on Music For Airports, accessed here.