If the hordes of Genghis Khan had moshed, Tengger Cavalry might have been their soundtrack. Taking their name from the Mongolian god of the sky, the band combines galloping metal and beautiful, shamanic folk music to make for a sound that is almost completely unique.[1] The re-recorded release of their début album, along with two bonus tracks from their 2009 demo, is an interesting treat for established fans, showing both the roots of their more recent and more popular albums, and helping mark how far the band has come in the meantime.

The fantastic tribal drumming of intro ‘Hymn of the Mongolian Totem’ leads neatly into thunderous opener ‘Tengger Cavalry’. The inclusion of the original 2009 demo version offers listeners the chance to compare the new to the old, and both have their merits. The new version balances the folk and metal instrumentation much better, has a better sound quality, and is overall the superior version. The 2009 version does demonstrate some fantastic shredding at roughly the halfway mark, but this would sound out of place on the new version – though the new version could certainly do with some sort of guitar solo to make it slightly more rousing and attention-grabbing. The rest of the album is an interesting blend of the beautifully-played morin khuur (horsehead fiddle), Khoomei, or overtone singing, [2] [3] [4] and a bombastic black/thrash metal, all of which merge together to create one of the most original sounds in modern metal.

The Khoomei singing gives the album a shamanic, tribal atmosphere, and helps keep the album in touch with the ancient traditions of Mongolian culture. However, aside from the growls on the black metal demo tracks, it is the only vocal style demonstrated on the album, due to there being no lyrics, and so gets somewhat overused. The metal also gets a tad repetitive in places, seemingly only focussed on rendering the sound of galloping hooves as guitar motifs. Later albums also address these complaints: The Expedition and Ancient Call strip back the Khoomei singing in favour of a more snarling vocal style, which suits the metal much better. There are clean vocals as well, on songs like ‘Khan’ from The Expedition, which help accentuate the folk music better. These minor complaints are, however, tempered by the wonderful horsehead-fiddle interwoven amongst the thunderous metal. My favourite track of the album is ‘The Native’, a gorgeous instrumental driven by frontman Nature Ganganbaigal’s skillful playing. Giving the fiddle a song mostly of its own allows its beauty to really shine, which is not always possible when surrounded by the aggressive guitars of the rest of the songs. On top of that, it is the instrumentals that make Blood Sacrifice Shaman so great an album – not only do they break up the relentless pace of the metal, they allow the more traditional folk music to really shine through, which is something the later albums keep up, with songs like ‘Echo of the Grassland’, ‘The Battlefront’ and ‘White Pony’. 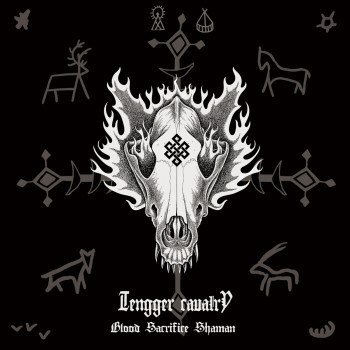 Tengger Cavalry also show that they can strike the fine balance between folk music and metal that can trouble other folk metal bands like Equilibrium or Ensiferum. The fiddle and Khoomei singing are never completely drowned out by the guitars and drums, nor do they feel superfluous or merely decorative. They complement each other nicely and, when allowed to shine in the interludes mentioned above, they ease the breakneck pace of the metal to help emphasise the shamanic folk music on display. While this balance is mostly maintained into the later albums, it is trodden best here on the début, and eschewing the lo-fi production values of the black metal demos has only helped in that regard.

Arguably, given the relative youth of Tengger Cavalry’s career, re-recording their début wasn’t necessary. But ultimately, it’s still a good listen, and the album is a strong introduction to their general sound for new listeners, as well as a chance to explore its roots for older fans. The inclusion of the 2009 versions of ‘Tengger Cavalry’ and ‘Blood Sacrifice Shaman’ shows that abandoning their black metal origins has only helped the band. The music on the later albums may be stronger, more epic-sounding, but it still retains the balance of folk and metal of the debut. It gallops along like the cavalry from the steppes, and is much more pleasant on the ears than the lo-fi black metal of the demo tracks, a comparison only possible thanks to this remastered début.