2016 is turning into a great year for metal, with a set of strong underground releases and a real sense of a thriving scene. Nowhere is this clearer than in the North West of England, where alongside recent releases from Conan and Boss Keloid gaining wide critical acclaim, Liverpool’s The Bendal Interlude (who neatly shared a stage with the aforementioned bands in Manchester in April [1]), have now added their debut full length Reign Of The Unblinking Eye into the mix through Black Bow Records. The three bands have previously shared stages, but have now shared labels and producers of three of this year’s best releases so far.

The opener ‘Buckfast for Breakfast’ is a go-to track for the morning work commute. An introductory sample bemoans “I go to work, I punch a clock, I do the same thing day in day out…” before a huge infectious riff kick in, one that flows throughout the track and immediately gets you onside with this release. Conversely, ‘Losing Things’ is next up and contains a healthy dose of Iron Monkey-style sludge, all distortion and screams, a very different track to the opener but fits under the same umbrella. 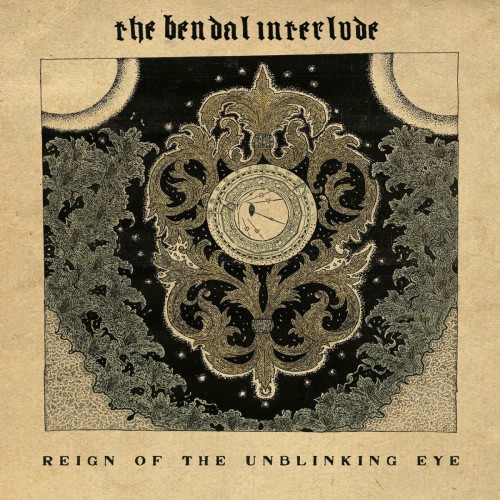 It’s not all nice stoner grooves though. ‘Pint Of Bodies’ is a a much faster track than has previously featured on the album, and sees Nat Gavin’s vocals change from his visceral scream to a darker, deeper growl. The album then swings between the harsh doomy sound of ‘Creeks Gigantic’ and back to the Cathedral-like groove of ‘Triumph of Fortitude’, then rounding out on the doom sound with the final two tracks (although they still find hooks that keep it from getting too downbeat). ‘The Block’ is another great track with a top video [2] and then comes the closer ‘R.I.P.’, a very loose track which encompasses all of the different influences found on the record in its seven-minute run. If there is a downside to the album, it’s that you don’t quite get the in-your-face experience of their live show, which comes fully recommended.

Reign Of The Unblinking Eye is one of those albums that you feel you already know, even on your first listen. A lot of nods to a lot of great (and varied) bands such as Iron Monkey, Cathedral, Orange Goblin & Church Of Misery, packaged together as something that the band can definitely build on with future releases. The production from Chris Fielding [3] is exactly what you would expect too. Clear, but with none of the raw and primitive aggression taken away from it.

2. Video for The Block, NSFW