In more recent times, the introduction of pop-laden melodies into more progressive and raucous music has become quite popular. From ‘death-disco’ purveyors Blood Command to technically minded Destiny Potato, more and more bands are steering towards a more mainstream sounding canvas without going ‘fully in’ to the pop realm. In The Great Discord’s case they’ve taken a bigger leap than most of their contemporaries. Their début, 2015’s Duende, was an extension of the aforementioned Destiny Potato’s core sound – soothing background harmonies competing against a strong, technically astute rhythm section. Fronted by central figure Fia Kempe [1], she remains the focal point of the band and brings sumptuous harmonies along with an incredibly powerful voice all throughout second album The Rabbit Hole.

After the opening introduction sets a moody, gothic setting, first track proper ‘Noire’ kicks in with a technical guitar tone and haunting ambience. The track soon gains momentum and Kempe’s smooth vocal tones flow all over a backdrop which embraces layers of catchy broodiness. The finale to this track is something to behold with an atmospheric nature that builds relentlessly to its conclusion. However, it’s when listening to tracks like ‘Darkest Day’ that the band descend further into territory more in common with the mainstream characteristics of Within Temptation and Lacuna Coil. Displaying a more emotive and melodic sound throughout, the simple guitar riff-driven chorus lends well to Kempe’s soaring vocal delivery but doesn’t especially invoke memorability or uniqueness. 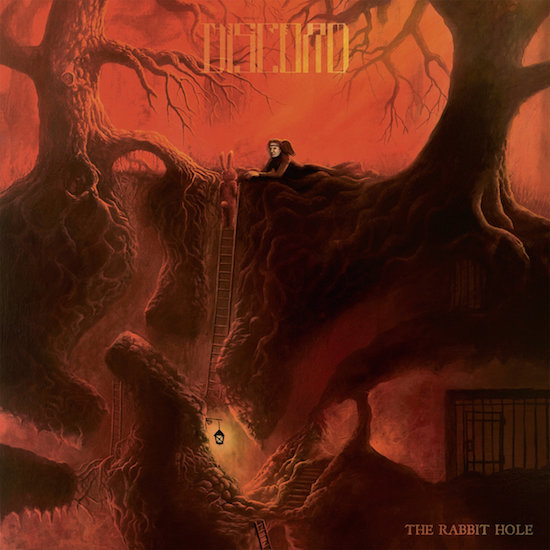 ‘Tell-Tale Heart’ adds strength to the band’s sound, combining a Middle Eastern vibe with random patches of blast beat drumming [2] and vocals that change key in a similar manner. Subtly played keyboards in the background lend a real symphonic air to the overall melody and makes this song one of the most relatable efforts when compared against debut record Duende.

But while there are numerous strong points on this album, efforts such as ‘Neon Dreaming’ and ‘Cadence’ create a level of unease that is difficult to shake off. One can’t help whether this slight change of musical direction will enable the band to continue to go down the more melodic and symphonic metal route, or if they will ever reinstate the more technical side of their sound which made them such an immediately accessible and unique proposition.

Things perk up towards the end of the record; ‘Omen’ shows that the band’s newfound ‘poppiness’ can be made to fit alongside technicality, the best example of guitar showmanship being a rumbling, staccato riff as well as a dazzling solo which excites as much as it shows off towards the end of the song. This track also highlights the levels of production throughout the course of this album, which veer from the superbly polished to merely extremely clean. Along with the strong image that this band have portrayed since their inception, it’ll be no surprise to see them follow a similar path to the one that Ghost have trailblazed – certainly when you consider the current links between the bands.

There’s plenty to like about The Rabbit Hole, whether you favour emotion, progression, technical ability or catchiness – the latter being a key constituent of the recording. If you come into this body of work hoping for more of their original technically-minded sound then you may be a tad disappointed, however, The Rabbit Hole has set the band up for an interesting direction as their career continues to gain momentum.

Footnote:
1. You may know her for her collaboration on Ghost’s track ‘Popestar’.
2. Another Ghost reference here, as the drummer is ex-Nameless Ghoul Aksel Holmgren.