Sometimes it’s the little things that make a big difference. The difference between ‘blackened folk metal’ and ‘folkened black metal’ may sound small on paper, but the resulting sounds can vary wildly between bands or albums. Such is the case with Metachthonia, the new album from Canadian band Thrawsunblat. Whereas previous album Wanderer On The Continent Of Saplings was very much a folk metal album first and foremost with black metal elements, on Metachthonia the inverse has true. Much darker than its predecessor, it is an emotionally charged tour de force that offers catharsis and – remarkably when considering how dark it is – even a sense of hope and joy.

As with Wanderer…, Metachthonia is a concept album. Whilst the past album was heavily cloaked in death and a sense of morality – unsurprising, considering the events around the time of its creation and members’ involvement in Woods Of Ypres [1] – Metachthonia, according to the press material, takes as its inspiration the idea of “the age after that of the Earth”; in this case, the modern world, which has led to a disconnect with nature. This knowledge is not needed to enjoy the record though, but it does help explain the change in Thrawsunblat’s approach. The most obvious is the move toward longer songs; most of the six songs here are close to ten minutes long. This gives the tracks plenty of time to grow and develop, wrapping the listener in a cocoon of sound, and where each subtle shift of tone or chord is given more importance. Despite their extended length, the individual tracks (and album as a whole) feels more focused than Wanderer… did. The songs do not sprawl, and never feel longer than they need to be. Rather, it feels as if Thrawsunblat have become more skilled at combining and moving between different sections and ideas, rather than separating them in to different songs.

The shift from blackened folk to folkened black is evident in other ways, too. The acoustic tracks that helped break up Wanderer… are gone, and whilst there are still folk instruments used, they are done so in weightier, more emotional ways. Gone are sections such as the jaunty piano introduction of Wanderer… opener ‘Lifelore Revelation’, replaced by much darker cello sections. The way clean vocals are used also adds an extra weight to proceedings, helping the music to touch upon a grandeur comparable to that of latter-day Primordial. And whilst Wanderer… could hardly be described as pop music, this is a darker album – inasmuch as there are fewer sections designed for raised fists and drunken sing-alongs. Such moments have not been removed completely though, and when they do appear, are all the more effective for their relative scarcity. One such spine-chilling, life-affirmingly cathartic moment is in ‘She Who Names The Stars’ when the vocal and guitar lines merge. 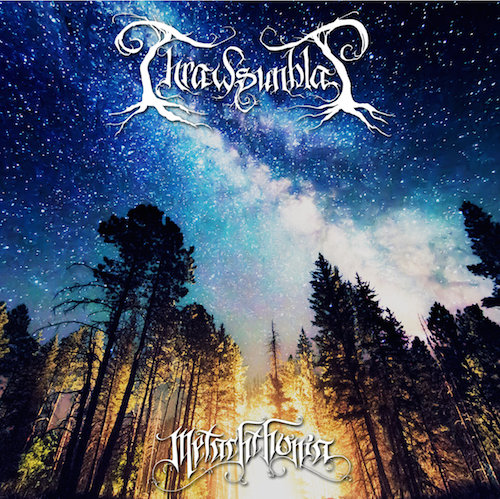 It is this aspect of Thrawsunblat which defines them and this album so well. If ever a metal band captured that wide-eyed wonder of those moments when it hits you just how beautiful life can be, despite all its potential for pain and loss, it is Thrawsunblat. Yes, there is deep sorrow in their sound, but that it is combined with moments of such sheer joy and power makes both sides of the metaphorical emotional coin that much more powerful. There is an understanding here that it is only through suffering that we can learn to appreciate and enjoy what we have. Metachthonia may be based upon the concept of loss that is inherent in the modern world – of that disconnect between nature and life – but it helps to go some way in rectifying that. It almost seems a shame that such sounds have to be captured and contained on a digital file or some physical format, because whilst it may be a metal album, if you listen closer, you’ll hear something far more profound and elemental. Open yourself to the concept, and you’ll hear the sound of life itself.