While I will easily admit I’m not an active enthusiast when it comes to death metal, if a concept album includes classical literature and human suffering on a massive scale, I’m sold. And that’s exactly what Sweden’s Throne of Heresy have done with Decameron – 10 stories (like Boccaccio’s 14th-century collection, from which the name is drawn [1]) spinning a massive narrative of the Black Death’s journey from Asia Minor and through Europe. You don’t get much more death and destruction than an estimated 75 to 200 million fatalities in less than a decade, making this disaster perfect source material for any death metal artist. [2] 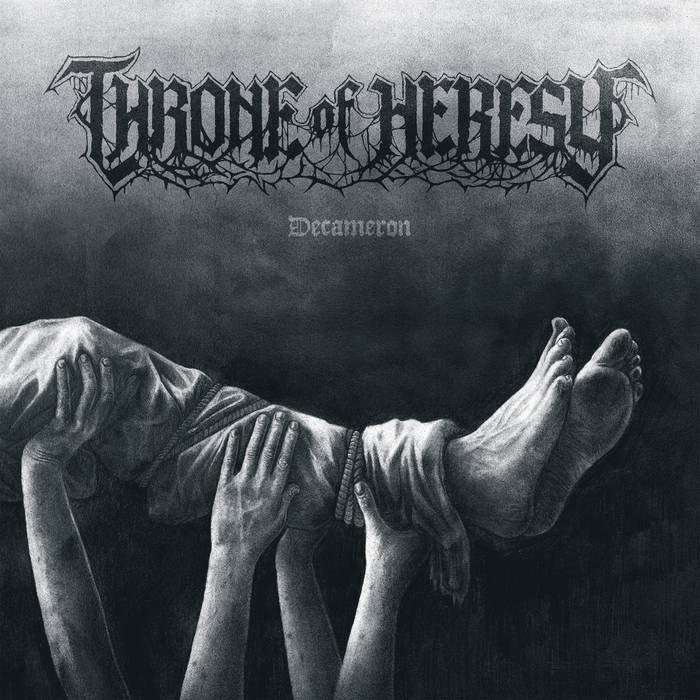 Stylistically, the Swedish quintet keeps one foot firmly planted in the Gothenburg death mould, but their narrative approach likens them more to Amon Amarth than At the Gates– although some acoustic passages (such as on ‘The Plague Ships’ and ‘The Pale Burden’) and clear, one-string melodies (‘Decameron’) positively recall Dark Tranquility. Production work from Magnus Andersson (Marduk’s bassist) is faultless, clear and gorgeously mastered: every nuance is crystalline, from the slight intentional discords that introduce ‘Siege of Caffa’ to the startling contrast of the clean vocals on the title track or spoken word on ‘Liber Secretorum’.

Given the subject matter, Throne of Heresy have had to really pull out all the stops in crafting something that captures the awful majesty of this tragedy, taking what was already an accomplished sound on 2016’s Antioch and maturing it to the extent where it becomes a fitting tribute. Few death metal acts could do so – perhaps Fleshgod Apocalypse could capture the soaring wave of emotion fuelled by so much grief, while Belphegor could recreate its unflinching ruthlessness; the aforementioned Amon Amarth would do well from a storytelling aspect and even the likes of Arch Enemy could package the whole as an easily accessible whole. Throne of Heresy do their best and, while Decameron is a really powerful, stirring record, it could do with a bit more of all these above-mentioned aspects being explored a little more.

Perhaps it’s my black metal background, but in amongst all the anthemic songwriting and clever melodic riffs, I’m finding the ensemble to be lacking in atmosphere: millions dead, dying and suffering but no moments of bleak emptiness, where all the tears you ever had and more have been shed, and you’re alone, raw and numb amidst the plague’s victims? The closest Throne of Heresy get to this is the bridge section of the album closer, ‘The Pale Burden’ – a gorgeous piece of metal music that concludes the proceedings on a moving note. The funereal bells in the last few bars are an especially nice touch.

Another aspect that has become irksome to me is how the album traces the migration of the disease from modern-day Kyrgyzstan all the way to Scandinavia, but the nature of the music itself stays constant, with the obvious exception being the blaring horns giving way to the ‘gapped’ pentatonic melody at the beginning of ‘Siege of Caffa’. This is a standout moment the likes of which the album could benefit from further usage of: Florentine Camerata-inspired operatics [3] on ‘Decameron’, or Grecian-styled perfect fourths in ‘Liber Secretorum’ (given the book’s Hellenic origins), or even incorporating dulcimer and fiddle on ‘Alvastra’ (although the clean female vocals may recall traditional Scandinavian herding calls, in this case), just for example.

Even though Decameron is a high point for death metal in 2017, the negative criticisms I’ve highlighted have, with repeated listening over time, become less minor issues and more noticeable irritations. However, this should not detract from the accomplishment Throne of Heresy should feel: original, intelligent death metal dealing with more than the usual gore, occultism or occasional philosophical themes is a rarity and Decameron is definitely a good example of creativity within an oversaturated genre. Factor in its excellent musicianship, catchy melodies and gorgeous production, and this is an album that will stand the test of time – and longevity is a better, more fitting tribute to Boccaccio’s Decameron than most death metal could ever hope to achieve.

FOOTNOTES
1. The Little Hours, an irreverent take on the same literary work, seems far less concerned with escaping the bubonic plague than with escaping the bounds of good taste.
2. Although it is equally suited to black metal, as illustrated by the band 1349 taking their name from the year the Black Death reached the shores of Norway.
3. Boccaccio’s classic hails from Florence, as does Florentine camerata music, which is often considered to be a form of proto-opera.