Trending
You are at:Home»Interviews»Tom Begley (Bossk): “We want to be hard to categorise.”
By James Parry-Smith on April 7, 2017 Interviews

Five years have passed since the resurrection of Kent-based Bossk, one of the UK metal underground’s most revered acts. They have achieved a great deal during this time, having signed to Deathwish Records, performed at a number of high-profile festivals, and written and released their debut full-length Audio Noir; the latter proving to be one of 2016’s musical highlights. Broken Amp caught up with bass guitarist Tom Begley to discuss all things Bossk in 2017, as well as their upcoming appearance at one of the UK’s finest underground metal festivals, Ritual Festival.

Far from prolific, Bossk’s initial incarnation saw them instead electing for quality over quantity, releasing a duo of EPs and a third video EP that turned heads within the far reaches of the metal underground. With the band’s sound lurking somewhere within the realms of any number of sub-genres that might include the word ‘post’, the Bossk experience cannot be classified so easily. “We are not really a doom band, or an instrumental band either”, explains Tom, “too heavy to be a post-rock band and too light to really be classed as a metal band. We want to be hard to categorise. It keeps things interesting musically not to be tied to a specific style.”

Bossk split up in 2008, which at the time felt like an untimely death for a band who were a shining beacon within the UK underground. They reappeared suddenly in 2012, however, self-releasing a single new original song in the form of the rollicking ‘Pick Up Artist’ (plus a cover of Fleetwood Mac’s ‘Albatross’) before signing to Jacob Bannon’s (Converge) esteemed underground label Deathwish Records and beginning work on their first full-length album, Audio Noir. “[The reaction has] been fantastic!” says Tom. “It was a long process for us, and something that was relatively new. But the challenges of making the record was kinda half the fun of it. We’ve always made things difficult for ourselves musically. To see so many people enjoy the album after such a wait is very rewarding.”

The intervening years between the band’s break-up and subsequent reformation saw many changes within the music industry, and things will undoubtedly have changed in the individual members’ lives as well. “Lots has changed [within the music industry]! Some things good. Some things bad. We are still figuring stuff out as everyone’s lives are so different to 2008. These guys are all old-time friends of mine, we are practically family at this point, so all the new stuff we get to do since reforming is equally exciting to all of us. We had no idea what we were doing before, now we are more focused on what the band needs to be doing in order to keep playing music.” I ask Tom how easy it was for the band to pick up where they left off after four years apart, and whether or not the newly-reformed band was approached as an entirely blank canvas. “[A] bit of both really”, he explains. “The main rule when deciding to do stuff again was to keep things fun. And so far everything’s great. We went a little too serious on it in the beginning, and some members enjoyed it less than others. We all know what each other wants from this now, the key to maintaining a band’s lifespan is [a]mutual respect for each other’s unique roles in the band.” 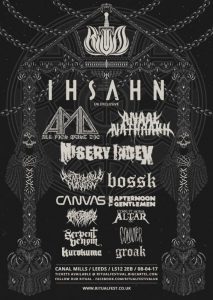 With a number of post-reformation gigs already under their belt and a stream of prominent festival appearances including Bloodstock, ArcTanGent and Damnation, their next port of call is the Leeds-based Ritual Festival [1], an indoor weekend-long festival that was launched in 2016 by founder Dan Vaughan, in an attempt to capture the best of the UK and oversees underground extreme bands. This year sees established names such as Ihsahn and Anaal Nathrakh play alongside some of the UK’s most promising up-and-coming bands, including Serpent Venom, Corrupt Moral Altar and newly-reformed UK hardcore legends Canvas. But how do Bossk feel about being a part of Ritual’s second instalment? “It’s great to see these kind of bills. Although we don’t share that much in common sound-wise with a bunch of those bands, people are starting to broaden their musical experiences by going to shows like this where they can watch a host of different kinds of bands. We’ve always felt a little marooned from what you could describe as the music scene in the UK, but as we get older we are becoming more comfortable being in our own little world and doing things how we want to.”

For anyone who has yet to experience Bossk in a live environment, the emotive force and lush atmospherics they manage to conjure up before unleashing a barrage of gigantic, crushing riffs is truly something to behold. Their set at Ritual this year promises to be something special, and should be filed under ‘must-see’ for anyone attending. “We are trying this year to play as much as we can, but we are fairly limited to what we can commit to due to 5 people all living different lives”, explains Tom, “but we give each show a concentrated focus based on what we are trying to achieve by doing it. We try to mix things up with some surprises to keep things interesting. Expect loud-sounding amps, smoke, probably not much talking. And songs performed from our new album.” 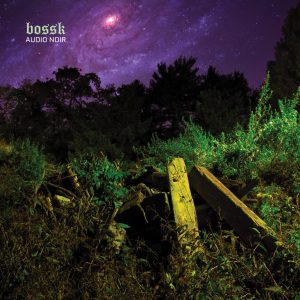 With tracks promised from last year’s superlative Audio Noir LP, Bossk will likely be at the top of their game in 2017, but being a band that incorporates multiple layers of sounds in the studio isn’t always easy when translating such a dense sound into a live environment. “[It is] quite a challenge”, says Tom, “but we wrote over half the album with the sole intention of it being fairly easy to replicate live. We don’t like to over-complicate things, they are already complicated enough.” Bossk are clearly a band whose music is intended to be experienced in a single sitting, and both the song-writing process and the band’s live performances reflect this approach. “Our set is always based around a full piece”, explains Tom. “Starting somewhere and ending up somewhere else. A journey if you will. So the dynamics of each song are written mostly with that in mind. The album is meant to be listened to in one play all the way through, and our live set is an adaptation of that I guess.”

While a sizeable portion of Bossk’s music is fully instrumental, another significant aspect of the band’s live show, not to mention being a key member of the band, is vocalist Sam Marsh, who stands patiently at the back of the stage while the remaining members build up atmosphere and tension. When he is called upon, it adds another dimension entirely to Bossk’s sound, and the results are emotionally and aurally devastating. Tom explains how the vocal sections are added within the context of the overall song-writing process. “We’ve always treated vocals the same way as pedals or effects when writing. The vocals allow us to take it up another gear, and add another side to the music. His vocal style will always be a key factor to the band’s sound. You don’t go buy some new pedal then use it on every part of every song, his vocals are added like every other instrument. To me personally too, it adds a bit of mystique to the overall feel of the song when hearing it for the first time.”

The artwork that adorns the covers of all of Bossk’s releases conveys a passion for both natural and science fiction landscapes, so I ask Tom if there are any specific writers, films or landscapes that have helped craft certain songs or even entire releases. “It’s more about the concept of anything being possible”, he replies. “In sci fi you can come up with anything your imagination can think of and make it into something. We want the same unlimited boundaries with our band.” That being said, Bossk do have some specific composers and scores that they all appreciate. “We are all big fans of Hans Zimmer, also the Blade Runner score, and all the John Williams movies are iconic because the music fits so well with the films.”

To close the interview, I ask Tom about Bossk’s plans for 2017 and beyond. “We are going to begin properly writing for a new release of some kind in the summer. We have the ideas for something already kinda there, but we have plans for something new as soon as we can deliver it.”

Many thanks to Tom for his time, and to Simon for the opportunity. Bossk are appearing at Ritual Festival at Leeds Canal Mills on Saturday 8th April. Check them out on Facebook here.