The most surprising thing about Crown Feral, the fifth album from Seattle’s crust-grind group Trap Them, is that it exists at all. After all, every release by this band has sounded as if it could be their last, such is their sound and intensity. Trap Them is a band where everything has consistently been pushed into the red, the sound of every sinew stretched as tautly as possible, every last drop of blood and sweat given until you’re convinced that the band are sure to collapse in on themselves. Much like fellow hardcore veterans Converge, the experience of a Trap Them record is one where the music is almost secondary to the violent release on offer.

It’s one thing to make a half hour of blistering hardcore that blows the steam off after a bad day; it’s another thing entirely to ensure the music itself is interesting, able to hold the listener even when they’re not in that pit of negativity that adds that extra sense of importance and vitality to music such as this. After all, if the music offered nothing new, there’d be little point in new records being made. Judged in this way, Crown Feral is a more difficult album than usual for this genre. Trap Them have never been an easy listen – their mix of hardcore, D-beat, grind and Swedish death metal is a technical, restless, multi-faceted beast – but on Crown Feral there is a more palpable sense of darkness, and fewer moments of obvious accessibility to latch on to. 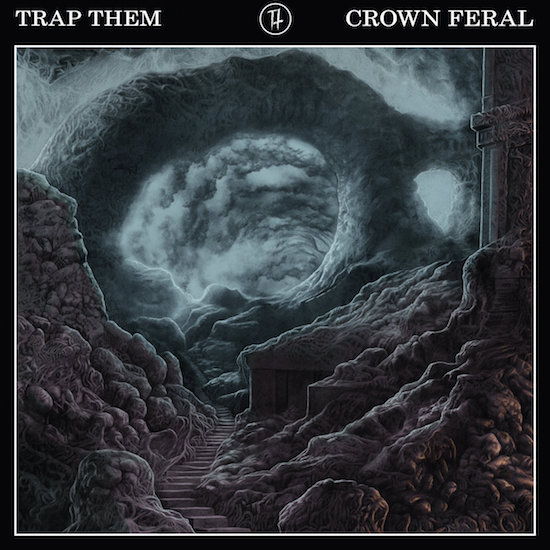 Accessibility might be a strange thing to discuss when dealing with music so violently intense and aggressive, but it’s easily overlooked. After all, even Converge’s landmark Jane Doe album featured ‘Homewrecker’ – an undeniably catchy number – and such moments are what made Darker Handcraft my favourite Trap Them record, with the almost rock’n’roll character of ‘The Facts’ providing an important point of contrast that helped emphasize how belligerent the album as a whole is. Crown Feral lacks such moments, and whilst there is variety here – such as on the Swans-gone-hardcore industrial stomp of ‘Twitching In The Auras’, which revels in slower tempos and a more brooding nature, and the second-long leads and guitar movements scattered throughout the album ensure things are never boring or settle for long in to simple chugs and blasts. There are moments which stand out, such as ‘Luster Pendulums’ which really lets the guitars fly, and the way the bass-led opening to ‘Stray Of The Tongue’ explodes in to life. Likewise, the transition from slower introductory track ‘Kindred Dirt’ to the more raging ‘Hellionaries’ is as thrilling as almost anything the band have previously released. But even at its most varied and energizing, the album is dealing solely in different shades of black.

There’s nothing wrong with that of course, and sometimes it’s exactly what you need. Propelled along by some superb drumming, where the blasts and rhythms are given extra character by dozens of small flourishes that seem to populate every song, and with such high-speed guitar work and a vocal attack that is never anything less than vicious, there’s no denying that Crown Feral is a snarling, spiky half hour of modern hardcore. It’s sure to revitalize after a bad day. But, if you’re not quite in the right frame of mine for what it offers, the album offers no easy way in, even for those of us who have grown up with hardcore such as this. As a whole, the album does feel as if Trap Them are maybe repeating themselves, going over largely the same ground as they have been ever since 2007’s Sleepwell Deconstructor. Even if they are though, it’s hard to argue with the passion and intensity displayed here, and whilst it may not exactly break new ground, Crown Feral sees Trap Them consolidate their place as one of modern punk’s most punishing, intense bands.