To quote the inimitable Duke Ellington, “it don’t mean a thing, if it ain’t got that swing.” Jazz and metal have had a turbulent history together, from the free-jazz leanings of many death metal bands (I’m looking at you, Atheist), to the swing tradition brought into some of Rob Zombie‘s work. [1] Diablo Swing Orchestra have even delved into the whirlwind style of swing metal to great effect. [2] However, none of them even come close to the insanity that Trepalium embodies: in their 13 years of existence, this French band have taken various strands of jazz and shot them to pieces with a groove-death metal shotgun.

Well, the resultant pieces have risen from the grave and possessed the members in a voodoo ritual. Over time they’ve lost some of that extreme metal edge, exchanging it for technical prog and an extremely danceable groove. It began with ‘Sick Boogie Murder’ on their second album, featuring what can only be described as ‘death metal scat’, and it’s been a slippery slope towards swing-death metal since then. Now, on their latest EP Damballa’s Voodoo Doll, there has been a major upward ‘swing’, with a brass section of guest musicians invited to the party.

Lead track ‘Moonshine Limbo’ kicks off the party in stunning form. Conjuring images of 1920s Prohibition speakeasies, the sounds of broken glass and piano pave the way for Sylvain Bouvier’s tumbling drums to introduce Trepalium themselves. With a fanfare to announce them, the band get down to their funky grooves. With every strain fully audible, from the trumpet blasts to the meaty bass, it’s beautifully mixed and So. Damn. Catchy. The scat singing surfaces soon enough, a wonderful introduction to the dreadlocked ringmaster-vocalist Kéké, who otherwise resembles a party hardy John Tardy (Obituary) in his rasping throaty shreds. 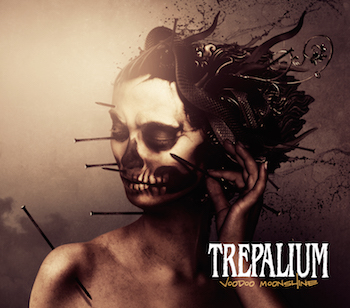 There’s one thing you cannot fault Trepalium on: each of the six tracks on this EP have their own charm and character. The title track resembles a New Orleans funeral march, replete with saxophone amid the grooving stomp. Joe Duplantier (Gojira) pops up, for the second time in Trepalium’s discography, for a brief spot of call-and-response vocals with Kéké. Later on, ‘Guédé Juice’ presents another highlight with its off-kilter guitar solo and frankly jaw-dropping drumming, and something about a hell of a hangover.[3]

Amid all the chaos contained in these 25 minutes, one thing sticks out like a sore thumb. The songs lack a specific direction: they dance around like a New Orleans funeral march that lost its Sat Nav, and end abruptly without a final ‘tadah!’. ‘Possessed by the Nightlife’ takes half of its 3-minute length to get started, while ‘Fire On Skin’ boogies into a breakdown à propos of nothing. The EP rounds out on the fantastic ‘Blowjob On The Rocks’ – assuming it’s the cocktail – with its harmonica solo at the beginning, and a beautiful crescendo that regrettably never sees its final release.

The track name ‘Possessed by the Nightlife’ sums up the EP neatly: it’s as maniacal and macabre as one would expect, with no idea how it will finish on the first or tenth listen. Trepalium have changed unrecognizably from their extreme origins, but what they have turned into is a magnificent swinging hybrid, albeit still needing a little ironing out. Now, shall we party?

Footnotes:
1. Rob Zombie – House Of 1000 Corpses, a song demonstrating the link between metal and swing/rockabilly, in this case.
2. Diablo Swing Orchestra – Voodoo Mon Amour, a song of swing metal.
3. “In possession, they [Guédé spirits] will drink or rub themselves with a mixture of clairin (raw rum) and twenty-one habanero or goat peppers.” Source: Wikipedia article.