Much like the Krabby Patty, many bedroom guitarists have sought to learn the secret behind the modern progressive metal formula that Meshuggah have spent decades perfecting, yet few of them have succeeded. The French prog collective Uneven Structure have made it very close with the (re)release of an EP and a full-length, however six years is a long time for any fan to wait for a new album. To everyone’s relief they have not only returned, but they have done so with a statement. There is clearly a lot more up the progressive sextet’s collective sleeves, and with the release of La Partition they have proven that they rightfully belong in the highly competitive European prog scene.

To say that La Partition is special to me would be an understatement, as I’ve been an avid follower of the band since their early days of two-thousand-and-“8” – that is, if you don’t count Longchat. [1] Alongside guitarist Igor Omodei’s demos, their début EP 8 served as the ‘Boom Boom Pow’ of their career at the time. Subsequently, the release of Februus in 2011 marked an awakening of the band’s strength in composition, with every member of the band consistently demonstrating their instrumental prowess. This release also saw a more prominent usage of ambient landscapes, typically masterminded by Aure “worC” Pereira, former guitarist. His recent departure raised concerns for the band’s future approach to writing, however their sophomore full-length took it one step further, and many were eagerly anticipating the discovery of what fresh blood Steeves Hostin has to offer.

What struck me as unusual was how the album’s compositional and emotional structure differs from more traditional songwriting arrangements – some might say it’s uneven. In a time when most albums start and end memorably but are lacklustre in-between, Uneven Structure focus on building towards a powerful climax reached through ‘Funambule’ halfway through the journey, followed by a gradual decay back into a post-metal atmosphere.

Their new material has strong influences from other subdivisions of the broader metal spectrum during the first half, resulting in an odd concoction of Tesseract, Tool, Textures and – to my teenage self’s disbelief – Ill Niño. The old Februus sound is nowhere to be heard so far, as the songs attend to feelings of melancholy and nostalgia through their use of clean vocals, which are rarely interjected by aggressive styles – conversely to Februus, which had a fairer balance of the two.

However, the listener’s potential emotional numbness is suddenly shocked as ‘Funambule’ administers an unexpected surge of adrenaline with its wall of sound, built with many layers of guitars and a tight and punchy drum mix. Matthieu Romarin’s distinctive voice suddenly becomes a medium for raw anger, as the instruments fight each other for space in the mix. The breakdown starting at 3:42 is one of my favourite sections in recent metal, combining a perfect balance of melodic and rhythmic aggression. 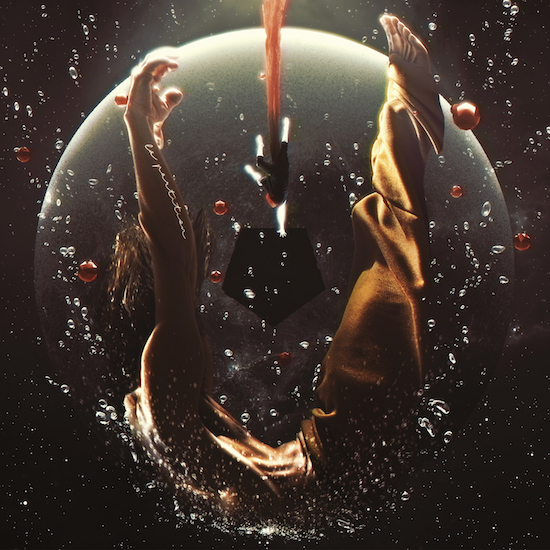 Personally, I hoped that this feeling would last longer, but the six-piece decide to go towards a different direction from that point onwards, revealing ‘The Bait’ in its entirety [2] after teasing a short section of it on social media more than a year prior to its release. The later stages of La Partition resemble something of an encore, cycling back and forth between calmer sections and bursts of heavy. ‘Your Scent’, however, makes for a fitting ending to the album, displaying full frontal absurdity which strongly reminded me of Strapping Young Lad’s chaotic personality.

In layman’s terms, La Partition is packed full of chunky riffs accompanied by ambient trips, and while personally I would have preferred more of the former rather than the latter, their unique measuring and combination of the two results in a comeback worthy of a listen, if not for the climax alone. While they have not yet unlocked their true potential, it may so be that they’re working on a recipe of their own – there may be less ‘shuggah content in the mix, but the offering is splendid nonetheless.

Trying my hand at writing. Consider this a disclaimer.