It would be safe to say Bristol based five-piece Valis Ablaze have been through the wringer over the last 18 months. After virtually completing a full album’s worth of material, charismatic vocalist Adam Leonard announced his departure, swiftly followed by guitarist Hugo Azvedo. It wouldn’t have been a surprise for the band to have called time, and for the existing members to concentrate on other projects – but Valis Ablaze decided that they weren’t done. After a slight reshuffle in the pack – which led to Orion vocalist Phil Owen and bassist Kieran Hogarty joining the band – Valis Ablaze scrapped what they had previously created in favour of restyling their approach, which brings us to new EP Insularity.

While Valis Ablaze’s previous sound bordered on the more progressive and erratic edge of technical metal (think SikTh crossed with Protest The Hero), there was an expectation that they might take a slight directional change from the aforementioned Owen’s more melodic approach to singing. While there is no doubt that the guy can roar with the best of them – take a look at his audition tape for the band [1] – the vocal course of this EP is mainly silky smooth vocals à la Dan Tompkins of Tesseract and Meyrick De La Fuente of Exist Immortal which lends itself to beautifully crafted songs.

Songs is the key word here. Gone is the eccentric edge to their music in favour of more accessible and melodic grooves while still retaining those angular, modern metal riffs that are synonymous with the djent scene. ‘Resolution’ starts with a softly played piano following into an atmospheric verse, while the chorus stands out with a slight hint of harsh vocals underpinned by a distinct key change and a strong performance from Tom Moore and Ash Cook’s guitar interplay. Further evidence of the improved song writing is shown in ‘Inertia’, which details intricate djent riffing over vocal harmonies that shimmer in quality and lift the track to an emotional, anthemic platform. 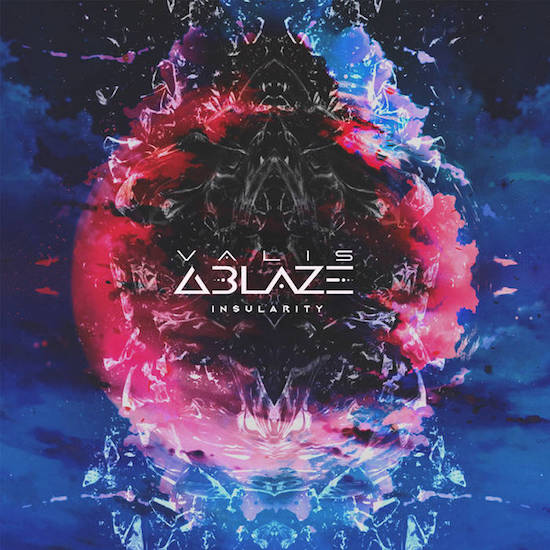 It’s not just soothing vocals and delicate ambience on show; there is visible aggression, notably through ‘Lost In The Syntax’ and ‘Persuasion’ – the former track starts with a flurry of electronic activity adding a further dynamic to their sound, before a combination of energetic guitar riffs and delicate vocals bring everything together. The latter track contains a bit more urgency and angst within it, concluding with a tasty breakdown (which will surely get heads banging) and arguably the grooviest passage of sound on this EP; this song is a well-constructed highlight. To wrap up proceedings, closing tune ‘Legacy’ strips everything back to the bare bone, with Owen’s immaculately strong voice combining with Rich New’s rising drum fill to build the track up to the final couple of minutes, displaying a fantastic crescendo.

Insularity is a mighty leap forward for the band. Coming in at just under 30 minutes, the record showcases Valis Ablaze’s remodelled sound as a sleeker proposition, with more emphasis on creating songs that flow with coherence and melody, while not losing their underlying technical abilities and punchy grooves. If the band can convert this release effectively into the live environment, then the sky is the limit for them.