Trending
You are at:Home»Reviews»Metal»Ved Buens Ende – Written in Waters (A Retrospective Review)
By Hera Vidal on May 26, 2017 Metal, Reviews

Introduction: An Avant-Garde Scene with a View

When black metal—as what we know it today—began, the music wasn’t focused on any idea other than the extremism of the music and its content. With characteristics that were rough on the ears—highly distorted guitars, high-pitch shrieks, and blast beats—and lyrics that promoted a strong sense of individualism and pride in other religions (read: Satanism), black metal sought to oppose everything metal had been up to that point. The music was crude and raw, with unpredictable melodies and the absence of rigidity, 1 and black metal musicians drew energy from the music’s chaotic nature. It wasn’t long until black metal began to take an aesthetic on its own, with corpse paint, inversion of religious iconography (inverted crosses, pentagrams, etc.), and intricate band logos that verged on the unreadable. Shock tactics especially became prevalent during this time, and they often escalated out of control.

Controversy began due to a significant amount of criminal activity that was allegedly tied back to the members of the Norwegian black metal scene. Between the numerous church burnings and Varg Vikernes’s arrest for the murder of Euronymous, a lot of the spotlight went to the deviance and violence that the members perpetrated, which developed into a national, and, to an extent, an international concern. Although one could argue that these events showed an escalation in internal competition for control of an emerging subculture, 2 black metal became known for its events rather than for its music. However, once the spotlight faded and the guilty went to prison, black metal returned to the music, and it began to change the way it sounded. While some did choose to stay within the established aesthetics, others began to experiment and, once again, began to push against the limits of extremity. One can’t help but notice how the genre began to expand and develop into other concepts, beginning with an interest in the avant-garde.

Avant-garde metal is incredibly difficult to define as a genre, but its general characteristics include the incorporation of unconventional sounds, irregular song structures, and instrumental experimentation that integrates numerous genres at once. 3 Although closely related to progressive metal – which focuses more on technical complexity – avant-garde metal is more unorthodox, allowing musicians to question musical convention. 4 The conception of the musical avant-garde can be traced back to the early 20th century, where classical musicians departed from the conventional and began to experiment with sound and noise. Dissonance became one of the main acoustical characteristics involved in the creation of the avant-garde soundscape, which incorporated different vocal timbres, dissonant succession of chords, and sound intensity. In short, it created noise that the listener failed to recognize and required concentration to fully appreciate the sound itself. 5 Taking this into context, black metal became the perfect breeding ground for the avant-garde after an absence of rigidity was established, leading to the creation of a subgenre that covers a lot of ground. 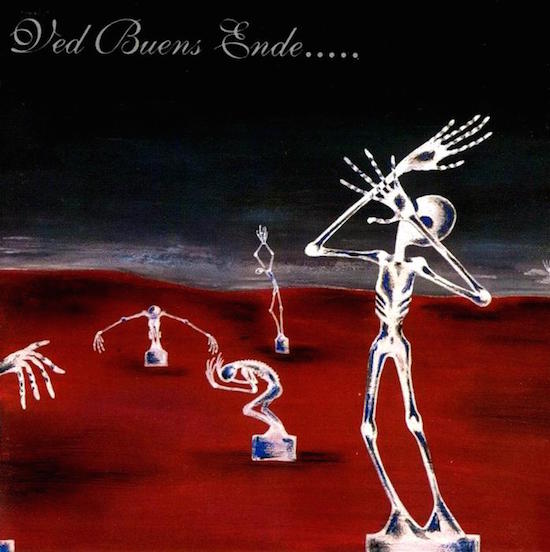 A Look into Ved Buens Ende and Written in Waters

When one thinks of avant-garde metal, well-known bands such as Arcturus and Oranssi Pazuzu in black metal come to mind. However, a band that precedes them is Ved Buens Ende, whose album, Written in Waters, is one of the stranger masterpieces in black metal. Ved Buens Ende may have not lasted very long—the band was together from 1993 to 1997, came together for a reunion in 2006, and officially called it quits in 2007 – but the members went on to create bands like Aura Noir and Virus – stalwarts of the extreme metal underground. The interesting thing about Ved Buens Ende is that they don’t sound like your standard Norwegian black metal band. For one thing, the amount of dissonance and atonality that was incorporated into their music makes it quite difficult to listen to. It isn’t an album that you can listen to once and then move on to something. To truly appreciate Written in Waters, it must be listened to more than once with an enormous amount of concentration, as there are repetitive moments that almost seem to be completely inaccessible.

On first listen, the listener will begin to notice the more accessible and aesthetical parts of the album, like the drumming. While the instrumentation of the record is impressive, it’s the drum playing that stands out. It’s not your traditional blast beat, but rather a more syncopated rhythm that helps create a wall of sound. It has some jazz undertones that lay the groundwork for a bigger theme that is not picked up immediately. The usage of an acoustic guitar is worthy of note, as, at the time, it felt out of place in an album labeled as black metal. However, it fits into the scheme of the music Written in Waters set out to create. The vocals are also a point of focus that seem to defy what was considered to be “true black metal”. They are clean, which was unheard of back in 1995, and when they do transition into howling, it’s to keep focus on the music. The clean vocals almost recall Johnny Cash in their crooning, yet with a more sinister overtone.

Based on first impressions alone, Written in Waters sounds esoteric and otherworldly, yet it is difficult to digest. This album would turn off many looking for something that can be easily consumed. However, things get interesting once the record is played again. The listener begins to notice that the first track sounds different each time it’s played. There are nuances that didn’t exist before, and a theme begins to emerge from the atmosphere. The vocals are hypnotic, siren-like, and intimate, like a lover’s caress, 6 with a melodic dissonance that only seems to build upon itself. The atmosphere is almost suffocating in its repetitiveness and otherworldly nature, and it continues to drag the listener further down the rabbit hole it has created. There are some surrealistic themes the album plays with, but they are so ominous that even Dali would be impressed. 7 The marriage between music and vocals is so incredibly well-put together that trying to pick apart the layers the music has created is almost impossible.

The impossibility of sound combination continues to expand, with focus changing from the drums to the heavy guitar. Here, the guitar acts as the balance between the jazz drumming and time signature changes, adding another layer to the atmospheric, surrealistic tone the album continues to build. However, this completely changes with the harsh vocals and the sudden inclusion of blast beats, reminding us that, despite the experimentation, this is still black metal at its very core. What is possibly the highlight of this song is the ending chord, which immediately brings the phrase “nightmare fuel” to mind. It becomes highly apparent, as the album continues to progress, that “nightmare fuel” is appropriate to use. 8 The atmosphere becomes even more suffocating, dissonant, and otherworldly than before, with that musical theme coming back to haunt the listener when you least expect it. Then, it becomes more experimental, as the usage of female vocals—a refreshing respite from the continuous vocal assault—and other noises begin to illicit fear. For example, in ‘Autumn Leaves’, you hear a range of noises—from dissonant guitar tones to heavy breathing to nails of a chalkboard—that makes your skin crawl. The album closes with ‘To Swarm Deserted Away’, with what sounds like a sad accordion is playing at the beginning, and it repeats the illusive theme again while Carl-Michael Eide brings his distorted vocals and piano tones into the mix. It reminds me of a slower version of 40’s French music, which, all things considered, can be seen as a nod to the word “avant-garde”. 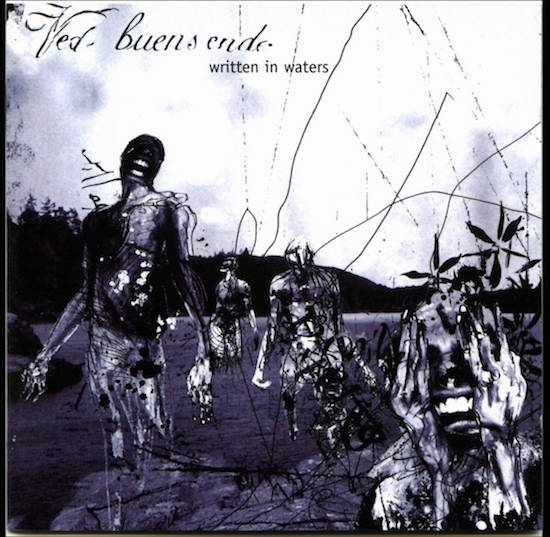 Nothing sounds like Written in Waters. For what it was, the album gave avant-garde metal a voice where it almost didn’t exist. It defied the black metal musical aesthetic, allowing bands on the more experimental side of black metal to take full control of their musical identities, embracing new sounds and instruments. Perhaps the concept of Written in Waters led to the evolution of black metal as a subgenre that allowed different bands with different sounds and tonalities to exist. It became an inclusive space that allowed avant-garde metal and its tonalities to reach far. Think of bands like Oranssi Pazuzu, who have infused jazz elements into their brand of black metal; A Forest of Stars, who have created a psychedelic brand of black metal that is both highly accessible yet musically complex; and Netra, who have infused trance and trip-hop elements into their brand of black metal, creating an arresting yet depressing atmosphere for the listener. Written in Waters, and Ved Buens Ende, may have been a one-shot band in their time, but you cannot deny that their legacy lives on in the experimental black metal bands that exist today.

5Arnaez, N.A.M. (2017). Noise in music or music in noise? A short discussion on the incorporation of “other” sounds in music making.

7Written in Waters could be the musical equivalent of The Interpretations of Dreams.

8I thought Entropy, by the Australian black metal band Spire, was a strange album, but Written in Waters was definitely ahead of its time.