Death metal and politics have had a long relationship. Many of the greats of the genre have had overtly political themes and stances expressed through their music – see Sepultura and Napalm Death – and many more bands have social themes, if not traditionally left-wing/right-wing lyrics. So, it’s no real surprise to find more modern bands combining death metal with social and feminist topics, as Wales’ Venom Prison do on Animus, their debut full-length record. Adding an intensity and viciousness that draws from hardcore to their death metal assault without ever veering into deathcore, Animus is a relentless bulldozer of an album, a defiant cry against misogyny and hate.

Other than introductory track ‘Syllogism’ – a bass-heavy mood setter, full of tension and imminent violence – Animus is a lean, streamlined album, full of momentum and ambition. There’s enough technicality in Venom Prison’s death metal core for the frequent shifts of tempo and emphasis to be convincing and impressive, without any flow being sacrificed. Tracks such as ‘Abysmal Agony’ also demonstrate a hard-hitting hardcore edge (little surprise, considering guitarist Ash Gray is a former member of UK hardcore bruisers Brutality Will Prevail), and ‘Celestial Patricide’ features a striking section where a guitar line rises above what could almost be a breakdown; the beast aspects of hardcore and tech-death coalesce in one superb movement. It’s easy to imagine the vast majority of tracks being absolutely explosive live, with their combination of speed, righteous anger, and strong song writing that melds so many diverse movements in to coherent wholes. Vocalist Larissa Stupar’s presence is never short of powerful, but with hints of raw edges that add to the hardcore feel. Drummer Joe Sheehy is also worth highlighting, delivering a crushing performance that keeps the songs moving forwards without resorting to simply blasting away with no variety. 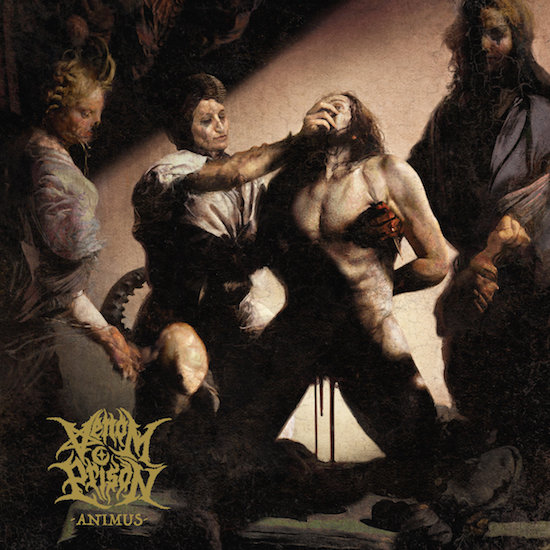 Perhaps the most remarkable thing about Animus, though, is that its lyrical themes aren’t explicitly thrust down the listener’s throat. That’s partly down to the production, which gives the guitars a lot of volume and crunch – regrettably at the expense of the vocals – but also Stupar’s technique and the song titles – such as ‘Corrode the Black Sun’ – do not always make their themes readily apparent. The album deals with its politics and social commentary with a degree of subtlety and cleverness that is often lacking in death metal (and music in general), and a bit of work is often required on the part of the listener to fully hear Venom Prison’s message. The obvious exception to this is 96-second rager ‘Perpetrator Emasculation’, about taking very physical revenge upon rapists (something reflected in the album cover). It’s a different approach to the one taken by Castrator [1], who have written songs with similar themes. It’s depressing, then, that the band have come under attack for this, considering death metal’s long history of bloody, violent, repulsive fantasies against women. [2]

If there’s any complaint to be made about Animus, it’s that it is an intense, violent, overwhelming listen, and hard to absorb in one go. There’s no obvious lead track here, no single track that is built upon hooks to pull listeners in quickly. ‘Immanetize Eschaton’ may be the requisite slower song, but even then there’s a Hate Eternal-esque violence and weight to it. Instead, Animus is the kind of album you have to immerse yourself in, letting it crash against you until its relentlessness can be tamed. As such, it does require a few listens to really appreciate, but it is time well-spent, and at 34 minutes, Animus never risks overstaying its welcome. It’s one of the most confident and impressive death metal debuts of recent times though, from a band unafraid to make themselves – and their message – be heard.

[1] Check out Castrator on Bandcamp, and Noisey’s interview with them.

[2] To take one obvious, well-known example, Cannibal Corpse‘s The Bleeding has several songs about rape and sexual violence towards women, and many more can be found in their discography. And that’s to say nothing of more underground scenes, such as genre offshoot pornogrind.