If you have an interest in Voices, there’s a pretty good chance that you’re reading this because you’re aware of their deep connection to Akercocke, the legendary band out London, England. Akercocke were responsible for some of the most forward-thinking, unique death metal albums of the late 90s and early 00s. They blended influences from bands as diverse as Autopsy to Bethlehem, and as the years wore on they expanded their influences and refined a sound that was all their own.

Akercocke ended in 2012, and according to an interview with Louder Than War, that’s all there was to it.[1] At some point, the band just stopped. With vocalist/guitarist Jason Mendonca focusing on family life, and the time between rehearsals and live shows growing further and further apart, drummer David Gray and Peter Benjamin (guitar/vocals) joined with their live guitarist Sam Loynes (guitar) and new face Dan Abela on bass, setting out on a new musical exploration in the form of Voices.

Their début album, From The Human Forest Create a Fugue of Imaginary Rain, was released just last year, and it was very clearly a continuation and further exploration of the Akercocke sound. Dissonance clashed with sullen beauty in the form of blackened death metal against somber acoustic guitar and vocal arrangements. It’s fair to say that the overall direction was a bit more black metal than anything in Akercocke’s discography, but many of their stylistic trademarks were still noticeable.

Less than two years later, Voices are back with London, and while some of those same fingerprints remain intact, the emotional potency has been intensified to nearly ludicrous proportions. Everything has been ramped up and amplified, as though someone were holding a gun to their heads during recording and screaming “Emote!” between each take. There is no stronger evidence than in Peter Benjamin’s positively manic vocal performance. If there were a misery spectrum, he’d cover it from end to end. From the all-too-human screams of a man subjected to some horrific torture, to the tentative, mournful croon of a freshly-rejected lover, the only feelings ignored here are those related to joy or warmth. 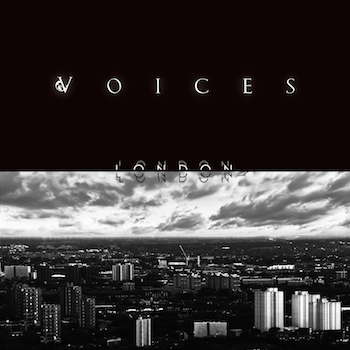 The instrumental side of things is definitely equal to the task of keeping up with Peter Benjamin’s vocal convulsions and abrupt about-faces. Amongst a wealth of examples, you might look to ‘Vicarious Lover’ as a microcosm of the album as a whole. Within its seven minutes; the song jumps from a riff centered around rhythmic use of atonal pinch harmonics to a deep and resonant grinding black metal section. From there it moves into a steady blasting section, while the guitars lay back with plaintive acoustic guitar plucking, and Benjamin oscillates between an uneasy warbling and demented shrieking, all of which do an excellent job of building palpable tension.

That tension never really lets up, even in moments where the band focus on softer dynamics and instrumentation. The first three minutes of ‘The Antidote’ utilize a fragile clean guitar line, with equally frail singing, to build to a massive climax. It’s something you might have expected Anathema to do in their 90s Judgement era, had they been just a tinge more bleak-minded.

The concept of the album and the story it tells is sadly difficult to piece together without lyrics or further information.[2] It is worth mentioning that there are spoken word sections throughout the album, which help fill in some of the gaps. Those moments feature both a male and female voice, and both seem to paint a grim and hideous picture of London and its inhabitants, which would certainly coalesce with Voices’ musical aesthetic.

Understanding that London is a concept album of sorts, and that there’s even more to investigate beyond the music, is exciting indeed. As it is, without the benefit of further insight; this is one of the most fascinating albums of the year. For all of its madness, refinement, and audacity, it’s an absolute must-listen.

Footnotes:
1. Interview with Louder Than War
2. There is more to come on this.