It’s a core belief of mine that, when it comes to music, innovation for its own sake is vastly over-rated. Whilst there is much to be gained from exploring new musical ground, sometimes, it can be equally satisfying to hear a band taking the core tenets of their chosen style and playing them with incredible passion and self-belief, with such desire and enjoyment more than making up for any perceived lack of innovation. Heretical Wisdom by one-man black metal act Void Ritual is a fine example of an album that may not be all that ground-breaking, but where the music is played with such conviction and talent that any complaints are rendered obsolete in the face of its onslaught.

Bar the brief gentle introduction to opening track ‘The Flood’, Heretical Wisdom is an album awash in blasphemous fury. Taking the second wave of black metal as core inspiration, sole member Daniel Jackson has created a 35 minute thunderbolt, filled with furious riffs, ice-cold leads, and an unshakeable sense of belief and momentum. The balance between melody and brutality is struck perfectly, with songs such as ‘The Maelstrom’ and ‘A Mockery Of Flesh And Bone’ as defined by their memorable leads as they are by blasting drums. Likewise, there is a sense of grandeur throughout, with that kind of dark nobility captured by Satyricon on Nemesis Divina also present on Heretical Wisdom, granting the album that larger-than-life feel which helps make the best black metal feel so important, beyond being “just” music. 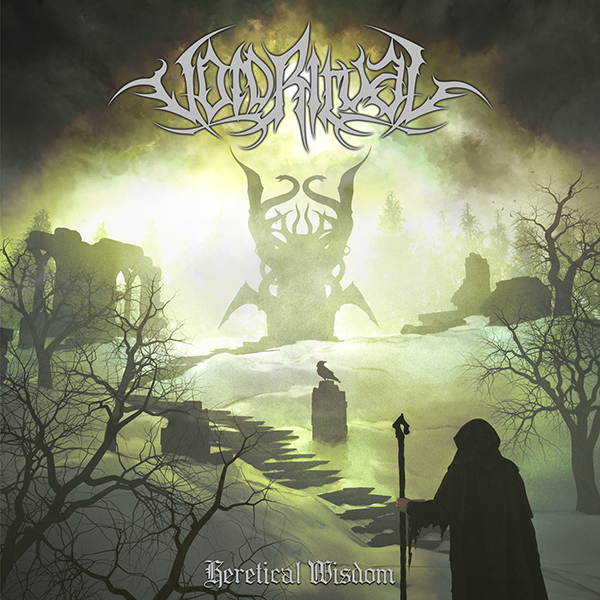 Whilst second wave black metal is an obvious point of comparison, it’s to the credit of Void Ritual that, whilst Heretical Wisdom may recall a host of different acts from that scene, it never feels as if it is imitating or in thrall to any particular band. There are hints of Marduk, Immortal, Emperor, and the aforementioned Satyricon throughout – be it in the cold and grandiose atmospheres, the bloody-mindedness of the drums, or the memorable, attention-stealing melodies – but Heretical Wisdom constantly feels as if it is its own album – a case of “inspiration not imitation” if there ever was one.

As thrilling as Heretical Wisdom will undoubtedly be to fans of second wave black metal, and as strong an album as it is, it is not an album without flaws. Songs have a tendency to close out in a way that feels premature, and though there’s variety in the songs, it is of a subtle kind that may take some listeners several spins to fully appreciate. These points should not detract too strongly from what is an immensely enjoyable album though, that demonstrates that even after over twenty years, second wave black metal still has the capacity to thrill and excite when played with passion and talent, as it is here.

Full disclosure: Daniel Jackson has written for Broken Amp. This has had no bearing on my review of the album.