Tracklisting:
1. The Earth Only Endures
2. Forests Ash By Dawn
3. Toward Mountains
4. The Elemental
5. Stormcall
6. Children Of The Iron Age
7. A Place Among Stars
8. Skysong

There are times when a band’s creative output is so attuned to their link with nature that it inevitably betrays their indigenous surroundings; the effect so intoxicating that their corporeal influences can, figuratively speaking, terraform the listener’s personal world. Colorado’s Wayfarer are one of those bands – the commanding vistas of their native Rocky Mountain landscapes breathing a profusion of life into their pensive blend of atmospheric, folk-inspired black metal. A profound sense of instinctual cognisance surrounds Wayfarer that filters in through minor chords and melancholia; the result not necessarily morose, but rather an intrinsic wistfulness that directs attention to the emotive complexity within the music.

Grasping at the foundations fashioned by their 2012 demo release, the songs and ideas are fleshed out and built upon here – a full line-up finally allowing original duo Tanner Rezabek and Shane McCarthy the opportunity to fully realise their creative vision, swapping the programmed drums for Isaac Faulk’s considerable talents – be it modest tribal infusions or unrestrained extremity. The dual-pitched vocals prove effectual and are utilised well, with rasping screams and low-end growls complementing both the ambience and tumult at all the right moments.

Despite the substantial black- and post-metal severity that forms the underpinning of Wayfarer’s music, Children of the Iron Age is, at its very core, a beast of subtle persuasion that meanders through thoughtfully crafted guitar melody and vulnerable contemplation. The folk influence is equally subtle and is hinted at rather than worn on sleeves, existing to bolster the character of the music rather than define it. Title track ‘Children of the Iron Age’ is the epitome of all the band have achieved here, showing sparks of latter-day Drudkh as it sways amongst domineering belligerence and atmospheric abandon.

But it is also a beast of irrefutable intricacy, both in terms of the structure of the songs and the visceral weight that emanates from its very being. The ornamentation is awash with acoustic passages, understated percussion and chanted vocal harmonies; ‘Forests Ash by Dawn’ becomes the quintessential embodiment of these characteristics, irradiating particularly well within the gloom before erupting with a gratifying crescendo, whilst ‘A Place Among Stars’ impresses with its striking riffs and unrelenting sense of urgency. 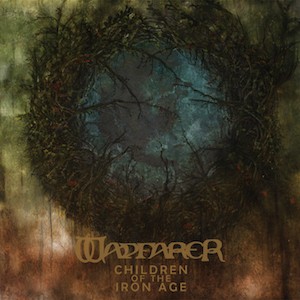 The protracted existence of the album (or perhaps more accurately of the individual songs) could be construed as both a strength and a weakness; after thirty minutes – and with another thirty still remaining once the captivating instrumental jaunt of ‘Stormcall’ provides a brief respite – experiencing Children of the Iron Age in its entirety begins to feel like a daunting prospect. The combination of dispiriting post-metal and ingrained austerity begins to weigh heavy on the soul – the consistently lengthy compositions being the prime suspect for such despondent sensations. Yet the strength and maturity exhibited in the songwriting is the metaphorical sun burning away the fog, and although some remnants of this weight still remains, repeated listens reveal hidden resplendence that truly opens up the antediluvian impression that Wayfarer have forged here with such excellence.

What allows the album a final breath of life is, ironically, its longest composition, with fifteen minute concluding piece ‘Skysong’ the bearer of lightened burdens. The flow of the album remains unaffected, yet the focus is noticeably maintained – perhaps even amplified – as acoustic guitars lead the listener through sprawling melody and technically tight, riff-driven black metal.

Children of the Iron Age is emotionally draining yet seldom tiresome, showcasing a level of intelligence and songwriting maturity that is rarely matched within the genre. With further highly praised 2014 releases from such eminent acts as Agalloch, Winterfylleth and Primordial, Wayfarer impressively stand tall amongst their peers, drawing inspiration from the world around them and delivering over sixty minutes of awe-inspiring music. It is not necessarily an easy listening experience, particularly in the context of other – perhaps more candid – folk metal contemporaries, but it is an ultimately rewarding one that will undoubtedly pave the way for an equally rewarding career.