Trending
You are at:Home»Features»Weakling – Dead As Dreams (A Retrospective Review)
By Stuart Wain on March 31, 2017 Features
Band: Weakling
Album: Dead As Dreams
Record label: tUMULt
Release Date: 2000
Facebook
Purchase/Download
Tracklisting:
1. Cut Their Grain and Place Fire Therein
2. Dead As Dreams
3. This Entire Fucking Battlefield
4. No One May Be Called As A Man While He’ll Die
5. Desasters In The Sun

There are several albums within any genre which can be considered cornerstones; records which, for whatever reason, came to define the sound and aesthetics of a particular style. In the case of black metal, there are some obvious ones, including (but not limited to) Mayhem‘s De Mysteriis Dom Sathanas, Darkthrone‘s Transylvanian Hunger, or Burzum‘s Filosofem. Yet when it comes to post-millenial USBM – the chief influence, whether knowingly or not, is arguably Weakling and their sole album Dead As Dreams, released in 2000 (though largely written in 1998 [1]). Containing five tracks, and clocking in a total of 76 minutes, it is a long, difficult listen, yet one that is distinct from what else was popular at black metal at the time, and it still casts a long shadow today.

The album opens with its shortest track, the intriguingly named ‘Cut Their Grain And Place Fire Therein’. Opening with atmospheric, whirlwind riffs that are soon complemented by pummelling drums and keys playing half-hidden melodies, it is an intense, uncompromising start to an album that is largely defined by those aspects. Whilst there is no denying the black metal nature of Weakling’s sound, there is also something different to it compared with what had gone before, something so-slightly wrong. The production is slightly murky, giving the album an atmosphere that is incredibly unsettling, with its largely unrelenting nature sweeping the listener away on the darkest of tides. This is all topped of by the vocals of John Gossard, who utilises a piercing, desperate shriek throughout that lends Dead As Dreams an extra emotional edge, cutting straight through the listener’s senses. Their style is comparable to that often found in DSBM, and is every bit as effective here as on the best examples of that styles.

As distinctive and strong as the vocals are, though, it’s the music that makes Dead As Dreams the classic that it is. The riffs of Gossard and Joshua M. Smith (formerly of The Fucking Champs) combine melody and muscular strength in a way that would come to define modern USBM. Though much of the album is played at blistering speed, there are moments when Weakling shift in to doom-influenced crawls. This helps give the album the contrast and different shades it needs in order to succeed, rather than having it collapse under the weight of its own power and speed. The opening minutes of the title track would, if released today, surely be described as being influenced by post-metal for their spacious, emotionally charged, restrained yet powerful nature – which is all the more astonishing when you consider that Dead As Dreams was released a year before Neurosis would release post-metal landmark A Sun That Never Sets, and Isis were still more a sludge band than anything else. The drumming, by Sam Foster – also known as Little Sunshine – is masterful, full of small fills and flourishes rather than relying simply on blasts to keep the songs grounded, whilst Cast Ward’s keyboards add extra character, rarely rising to the fore, but when they do they are handled with taste and restraint. Sarah Weiner’s bass may often largely be lost in the mix (an issue with much black metal) but you can still sense it is there, anchoring the riffs and leads even as they diverge, soar, and fall back to the earth.

What’s harder to put in to words is just how emotionally devastating the music can be. Even at its most straight-forward and punishing, Dead As Dreams possesses an aura of catharsis being striven for but not attained, of reaching forwards for something greater and more profound. This is true across much of the album, but there are moments worth highlighting, such as the riff at the 13:40 mark of the title track, and the way this moves into a more spacious segment that slowly becomes increasingly unsettling. The main riff to the first movement of ‘This Entire Fucking Battlefield’ is one of the most deceptively simple yet powerful in black metal – and the track as a whole is superlative – but it’s the movement that starts at the 10-minute mark that makes this song the highlight of the album for me, moving as it does with an atypical grace and tension that is hard to match. The restraint of the riffs only adds to their power, and when the vocals and solo kick in, for that brief moment, all other music is rendered utterly obsolete. 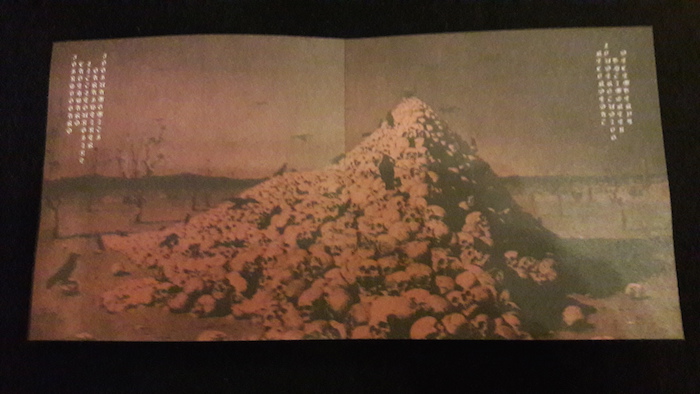 Yet for all of this, Dead As Dreams is not without flaws. Its length can be patience-testing, and there are points where its often repetitive nature works against it; as is often the case with atmospheric black metal, if the listener is not captivated early on, then elements that would otherwise add to the hypnotic, other-worldly atmosphere instead become dull and off-putting. The vocals can be especially jarring, with their indecipherable shrieks representing a high barrier to entry even by the standards of black metal. But, when it all works, it is an album of almost unparalleled power and grandeur, tapping in to that sense of otherness that defines the best black metal and doing so in emotional, cathartic style.

Even so, the album is something of an under-praised classic. Part of this is, perhaps, down to the relative expense of obtaining a copy – CDs on Discogs begin at around $17, whilst the double-vinyl version sells for several hundred pounds. Plans for a repress have been mentioned for several years now on forums and Facebook, but nothing is yet to materialise. Reactions to the record are certainly divisive too, with reviews on Metal Archives veering between the superlative and the scornful, and little opinion in the middle. There are also those who criticise the album for what came after it, with some in the underground dismissing it as the birth of “hipster black metal”, given the way that much of the high-profile USBM that followed in the wake of Dead As Dreams (such as Wolves In The Throne Room) helped give black metal appeal beyond the kvlt and trve, substantially changing the image of much of the genre in the process.

There is little arguing with its influence, though, even if it may not always be direct. There is certainly no doubting the musical influence of Weakling upon Wolves In The Throne Room, who exploded in popularity following the release of Two Hunters, an album which – in turn – has gone on to shape large parts of the USBM scene with its long songs and extended atmospheres. Weakling’s influence can also be felt in the more visceral side of USBM, with the riffs and unsettling atmosphere of bands such as Ash Borer having much in common with Dead As Dreams. The influence of the album is not limited to America though, with the recent album by Germany’s Ultha [review here] owing a clear debt to Weakling; whilst Mammal by Ireland’s Altar Of Plagues picked up where Weakling left off, albeit with a much stronger post-metal aspect, although comparable song structures, riffs, and atmospheres throughout.

It’s also worth remembering the wider context of black metal at the time of Dead As Dreams‘ release. US black metal had yet to find its identity [2], with the likes of Judas Iscariot and VON still very much in thrall to the music coming from Northern Europe, whilst Leviathan and Xasthur – who would come to dominate US black metal shortly before Wolves In The Throne Room – were still exploring their sound on demos. Of the dominant Scandinavian scene, Mayhem would release the experimental, controversial Grand Declaration of War before reverting to “safer” sounds with Chimera; Immortal were moving towards thrash and away from black metal with Damned in Black; whilst Midian and Puritanical Euphoric Misanthropia were set to propel Cradle of Filth and Dimmu Borgir respectively to mainstream attention. Relatively mainstream islands of experimentation and creativity could still be found in bands such as Ulver and Arcturus, but these were of a very different character to that of Weakling. 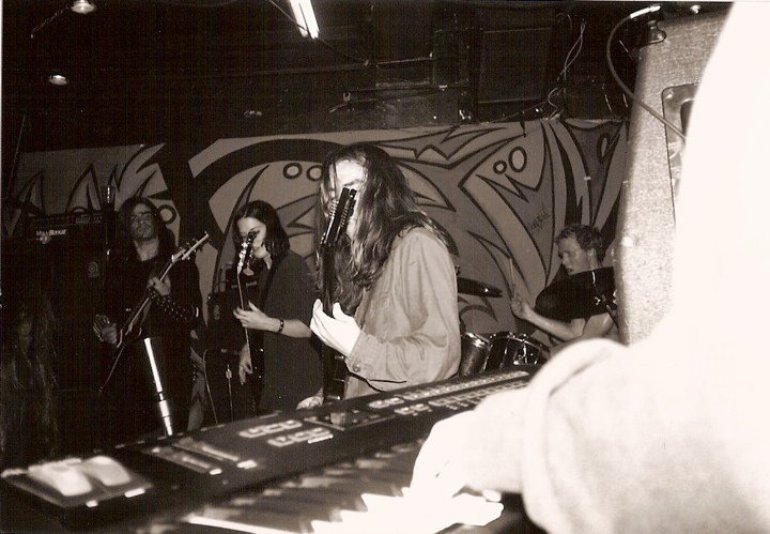 A photo supposedly from a rare live peformance, taken from Last.FM

It’s also startling to think how many of black metal’s evolutionary leaps that are now taken for granted were yet to happen at the time of Dead As Dreams, and have common ground with the album. Deathspell Omega were four years away from turning black metal on its head with the game-changing Si Monvmentvm Revires, Circvmspice and its bewildering, other-worldly atmospheres and textures; the Eastern European black metal sound as popularised by Hate Forest and Drudkh, that presents an interesting, more nature-based atmospheric counterpoint to Dead As Dreams, was several years away from receiving widespread attention; and the musically intense orthodox renaissance spearheaded by Watain was yet to move out of the shadows, with Rabid Death’s Curse receiving only a fraction of the attention 2003’s Casus Luciferi would, let alone the pivotal Sworn To The Dark in 2007.

There is also a feeling throughout that Weakling did not much care for black metal convention, as evidenced by their use of real (rather than stage) names; lack of corpsepaint; and that they named themselves after a song by industrial/avant-garde act Swans is telling [3], being far removed from the Hellhammer and J.R.R. Tolkien/fantasy references popularised by the Norwegian scene [4].

Dead As Dreams feels like an album produced in isolation from the wider black metal scene, predicting some of its coming changes whilst seemingly being uninterested in what was happening in the wider world, which further enhances the feeling that Dead As Dreams is a once-in-a-lifetime highpoint, a work of genius that could not possibly be repeated. [5] With all of this in mind, the achievements of Dead As Dreams only grow in stature, and highlight what a ground-breaking, creative, devastating album it is – one that still, seventeen years on from release, has few peers, and feels as fresh, exciting, and challenging now as it did on the day it was released.

Footnotes:
[1] Instrumental rehearsal versions of four tracks from Dead As Dreams were recorded on 25th May 1998, with only the title track not appearing on this demo tape. These versions can be heard on Youtube here.

[2] The chief exception to this would be Texan band Absu, but then, Absu have always been a law unto themselves, and have little in common with other US black metal acts beyond geography.

[4] For example, Mayhem’s Euronymous shares his stage name with a Hellhammer song, whilst band names Burzum and Gorgoroth are both derived from Tolkien’s fantasy world of The Lord Of The Rings.

[5] It’s notable that, whilst members of Weakling have gone on to other bands, such as Sarah Weiner drumming for avant garde act Amber Asylum and John Gossard forming black/doom act Dispirit, none have gone on to anything as high profile as Dead As Dreams.