Trending
You are at:Home»Reviews»Metal»Winds Of Genocide – Usurping The Throne Of Disease
By Dan Jackson on February 8, 2015 Metal, Reviews
Band: Winds of Genocide
Album: Usurping the Throne of Disease
Record label: Pulverised
Release date: Jan 26th, 2015
Facebook
Purchase/Download
Tracklisting:
1. The Howling Wolves of Armageddon
2. Deathstrike of the Scythe
3. Venomous Warfare
4. Into the Darkness of Eternal Nuclear Winter
5. Usurping the Throne of Disease

6. Millions Lie Slaughtered
7. Till Graven
8. Mass Graves of the Innocent
9. Swathed by the Black Wings of Death

If you’re the type of person who pays attention to the various ebbs and flows of metal subgenre popularity, you generally notice when a particular style has received more and more coverage from magazines, blogs, and podcasts. You might have noticed when American black metal suddenly became a big story, with Leviathan and Xasthur among many others being prominently featured in all of the major extreme metal publications. You likely also noticed the rise of post-metal and shoegaze-influenced metal over the last five to seven years, and certainly post-black metal and occult rock have been getting plenty of attention from major metal websites during that same time. Over the last couple of years, another niche gaining momentum in the ever-blending metal underground is d-beat and hardcore combined with black or death metal.

Finland’s Impaled Nazarene was well ahead of the curve in this case, taking inspiration from bands as disparate as Sodom and Sarcófago to Disrupt and The Crumbsuckers. Discharge certainly played a similar role for them as well, even in those formative death metal years in the early 90s. In more recent times, the influence of bands like Discharge (the band from which d-beat gets its name) can be inherited as a 3rd generation of influence rather than directly. Converge would likely count Discharge as a band that had an impact on their sound as they’ve evolved over the years, so when Trap Them takes stylistic guidance from Converge, they’ve inherited Discharge as a part of their sound, whether or not they meant to do so in the first place.

The fact that UK-based Winds of Genocide share more in common with old Impaled Nazarene as opposed to Trap Them, or even Black Breath, works to their advantage. While this road’s a bit older, it’s a lot less crowded. As Impaled Nazarene has different eras with different sounds, I’d place the musical influence as coming from around the time of Tol Cormpt Norz Norz Norz through Suomi Finland Perkele, a period that spans their primal early years, and their early transition into a stronger black metal inclination. Mix that together with some choice nods to His Hero is Gone, Disfear, and Tragedy and you have Usurping the Throne of Disease: the perfect counterpoint to the sudden glut of Sunlight[1]-worshiping hardcore bands. 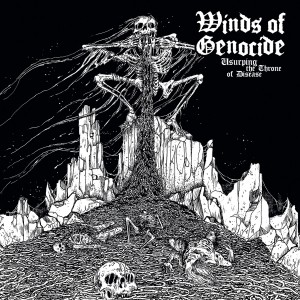 While it’s worth pointing out that you’re not going to find bold new style developments or really anything unorthodox at all about Usurping the Throne of Disease, what you will find is an abundance of conviction, a strong musical personality and an old sound given a new youthful life. Vocally, Kat Shevil comes across a mix of Al Long from crust punk legends Nausea with the early death metal leanings of Mika Luttinen (Impaled Nazarene). Her delivery has a viciousness to it that brings that conviction to the forefront, making the rest of the band’s passion for the genre utterly undeniable. Drummer Ian Hunter and bassist Dan Hughes are a solid rhythmic foundation for the band, even while sounding fluid, loose, and natural. That natural performance from Hunter and Hughes will become all the more vital as time goes on, as more and more metal bands remove the humanity from the rhythm section via quantizing and programming.

One of the album’s standout tracks, ‘Venomous Warfare’, provides an excellent capsule of Usurping the Throne of Disease as a whole. The early stages of the song echoes Tragedy at their least melodic, before bringing the melody into the mix using a single-string tremolo riff that would have been right at home on Impaled Nazarene’s Ugra-Karma.[2] Then, pick a couple of choice Disfear riffs, increase the tempo about thirty beats per minute and you’ve got all of the most prominent elements of the album covered in just under four minutes. That isn’t to say that Winds of Genocide fail to keep things interesting, because Usurping the Throne of Disease never really lets up from start to finish.

Looking at the album in a broader sense, Usurping the Throne of Disease is a record from a band still early in its discography and happy to wear its influences proudly. What they lack in forward-thinking ideas, they make up for with passion and vigor, championing a sound that isn’t being driven into the ground by people looking to be a part of whatever is now or next. It’s easier to respect a band that deals in older styles when they aren’t so easily identified sound-wise with a surge in popularity, as would be the case with bands in the Sunlight/d-beat category. It’s ugly, uncivilized and brimming with the kind of frenetic energy that many crust-and hardcore-informed extreme metal bands seem to lack, for all of their raucousness and speed. For that reason, Winds of Genocide is a notch above the rest, though the songwriting quality and execution make an equally compelling case.

Footnotes
1. Sunlight Studio – A recording studio in Sweden operated by Tomas Skogsberg. The studio produced hugely influential metal albums from Dismember, Entombed, Carnage, Grave, Amorphis, Katatonia and more. A complete list of the albums that were recorded at Sunlight Studio can be found here.
2. Interview with Noisey regarding Impaled Nazarene.