Leading lights of the British atmospheric black metal scene Winterfylleth have taken the saying “less is more” to heart in their latest offering The Dark Hereafter; it clocks in at just over 40 minutes, their shortest full-length to date by a significant margin. By no means is its brevity a bad thing, but it feels as though the album is less of a complete, standalone contribution and more of a stepping stone on the way to bigger and better things.

The album liner notes begin with a quote from British fellwalker Alfred Wainwright, who wrote what is still a definitive guide to the hills of the Lake District.[1] It discusses his plans for his final resting place, Innominate Tarn [2]:

“All I ask for, at the end, is a last long resting place by the side of Innominate Tarn, on Hastacks, where the water gently laps the gravelly shore and the heather blooms and Pillar and Gable keep unfailing watch. A quiet place, a lonely place. I shall go to it, for the last time, and be carried: someone who knew me in life will take me and empty me out of a little box and leave me there alone.”

This, combined with the mist rolling over the hills on the album cover, go some way to contextualising the album, which comes as close to pseudo-pagan nature worship as Winterfylleth get in their discography. ‘Green Cathedral’, for example, asks listeners to treat nature with the respect it deserves, as it is older and more mysterious than we know. This is followed by a cover of a song taken from Ulver’s Bergtatt, which focussed on Scandinavian folktales. The quote from Wainwright, then, serves to highlight the band’s relationship with nature: it is simultaneously proud and majestic and quiet and lonely – the peaks of Pillar and Gable are the proud watchmen looming over the quiet resting in the hills of the Lake District. So it is with their music: having cemented their sound over the course of their discography, The Dark Hereafter is intended to evoke the sense of proud majesty and grave quiet of nature as found in these places.

‘Green Cathedral’ is easily the longest track in the band’s discography, and the album’s crowning glory, emphasising Winterfylleth’s love of nature and its mysteries. They explain the idea in the liner notes as:

“that unsanctified space to be found where the street ends… Its doors are open to all who have the capacity to stop and look and listen to their breath…Now is the time to … find beauty in nature and holiness in our surroundings.”

The music evokes this image brilliantly. The song opens with murky, atmospheric sound effects courtesy of guest keyboard player Mark Deeks, and a slow guitar melody which builds into a slow, relaxed number. Much like ‘A Careworn Heart’ on the previous record, ‘Green Cathedral’ has no blast beats, which allows the melodic lines more room to breathe, in turn amplifying the atmosphere. Towards the nine-minute mark, cellos sing out, and the band’s male-voice harmony is brought in, adding to what is an intricate, delicately-layered paean to nature and its mysteries.

The rest of the album, however, does little to progress the band. They may have sharpened their production values here and there, and made a more concise album generally, but the album doesn’t feel like a coherent collection of songs. The title track opens the album with little fanfare, and listeners are launched straight into what is ultimately standard fare for the band, with lyrics that use archaic verb forms – “the night-helm glode away” – and discuss minds being “besieged by the devil’s lore.” Its only distinction is its brevity, coming in at just under 5 minutes.

Following immediately on is ‘Pariah’s Path’, a remastered version of the bonus track from predecessor The Divination of Antiquity [review here]. This is not an unusual practice for Winterfylleth: the whole Rising of the Winter Full Moon demo was re-done on The Ghost of Heritage, and The Mercian Sphere took ‘The Honour of Good Men on the Path to Eternal Glory’ and ‘Defending the Realm’ and made them sleeker and grander after remastering. ‘Pariah’s Path’, however, is not noticeably different between The Divination of Antiquity and The Dark Hereafter, and as such feels like a make-weight. This raises the question of why it was redone in the first place: if there is no discernible difference, why bother? There may be an argument in revisiting a track they previously kept hidden but have rediscovered and are proud of, but if that was the case, why make it a bonus track in the first place? 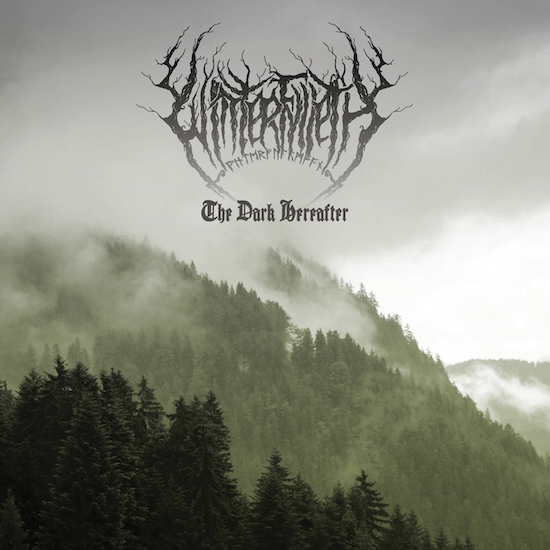 Covers are tricky beasts: to work well, the covering band should ideally give something of their own identity to the song, but not stray so far from the original that it becomes unrecognisable. So it is with the album’s closer: a cover of Ulver’s ‘Capitel I: I Troldskog Faren Vild’, renamed in English as ‘Led Astray in the Forest Dark’. While they have replicated the original almost perfectly, the vastly improved production values allow for Winterfylleth’s signature atmospherics to come to the fore, and their vocal harmonies sound almost monastic, adding a mournful Batushka-esque flavour to the melodic lines. All in all, it is a fantastic cover, and a strong way of closing the album.

This is all good, but the album still doesn’t stand up next to its predecessors. As mentioned previously, The Dark Hereafter is the shortest Winterfylleth album on record. Length is by no means an indicator of quality, but when the rest of their discography clocks in at an hour or longer, it feels as though The Dark Hereafter is too short by comparison. The gorgeous melodies they craft, underscored by wonderful atmospherics, are all on full form here, but there simply isn’t enough for the listener to really get involved in. One of the strengths of The Mercian Sphere is the way the opening two tracks run together, so the music has a chance to really wash over the listener. So why the short runtime here? As vocalist Chris Naughton stated in an interview with Nine Circles, they have the next two albums (including an acoustic album about which I am very excited) almost wrapped up.[3] An argument could therefore be made that The Dark Hereafter is more of a stepping stone between The Divination of Antiquity and Winterfylleth 6 and 7, hence why its brevity. This is not to suggest that Winterfylleth are obliged to make hour-long albums, but that The Dark Hereafter would have been better as an EP, given its brief runtime when compared to the length of their previous albums.

Ultimately, this is not a bad record, per se. The music on display is great, if standard, and the Ulver cover is brilliant: more of the liturgical vocal harmonies on future records would be very interesting. The Dark Hereafter just feels too short to be gratifying as a full album, and feels more as if the band have offered up a small collection of songs that won’t fit anywhere else in anticipation of the next two albums and made a full album out of what should be an EP.