Mellower than their previous three albums, Winterfylleth’s latest studio output The Divination of Antiquity is a black metal soundtrack to an October sun rising over the Lake District. The expansive music feels so in touch with nature, and particularly British nature, that it fits very well with our green and windswept land. The raw sound of the guitars captures something of the essence of the British landscape: not quite the cold, frost-bitten homes of black metal’s most famous acts, but still a hard, unforgiving, and strikingly beautiful place. That’s not to say that The Divination of Antiquity is unforgiving. It’s softer on the ears than their previous works, but it’s still black metal, with a fantastic atmosphere to match its lyrics that pull lessons from British history and apply them to the modern world.

It’s the atmosphere Winterfylleth create that I notice most on The Divination of Antiquity. Hitherto, this kind of atmosphere was something I’d only really experienced on post-metal or post-rock albums. Winterfylleth, however, manage to conjure something similar over black metal foundations. Warm and all-embracing, it starts on the title track, which pulls the listener in and washes over them instead of battering them with the aggression usually associated with black metal. But it goes beyond simply softening the black metal. Whereas contemporaries like Falloch or Wayfarer [whose latest we reviewed here] have atmospheres rooted in nature, Winterfylleth’s is steeped in the history they want their listeners to learn from: I can picture the guitar tracks of ‘Foundations of Ash’ being played as King Arthur led the Knights of Camelot into battle, while ‘The World Ahead’ could underpin a bardic story such as Beowulf.[1]

Perhaps the greatest triumph on the album, though, is the melodies brought out over and above the black metal underneath. The best example of this is ‘Whisper of the Elements’, which opens with somewhat mournful guitars and heavy blastbeats. But the riff that appears about a minute in, and the clean guitar call-and-response section a few minutes later, allow a beautiful melody to shine through. And shine it does: the call-and-response is a simple, yet gorgeous little interlude in the middle of the song, like a break in the omnipresent British grey cloud that allows the sun to shine on your face: perfect for a song about nature. 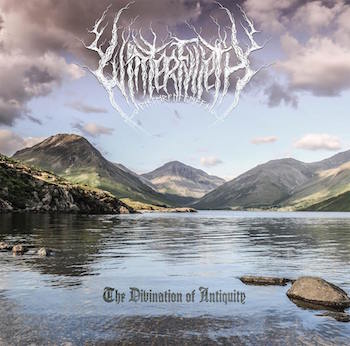 There are many breaks like this in the album, serving as contrasts that help emphasise the more aggressive black metal sections, but also to add to the warmer atmosphere of the album. Perhaps the best example of this is ‘A Careworn Heart’, which begins with a male-voice choir singing ‘oohs’ underneath a clean guitar solo, and leads into a song entirely without blastbeats. This particular song is one that has been noted as the stand-out song of the album, and it certainly does stand out from the rest.[2] The lack of blastbeats allows the more melodic sections, like the choral singing over the guitars and drums at the halfway mark, to really come through and, again, helps the music wash over the listener. Even without clean instrumental breaks, songs like ‘Over Borderlands’ and ‘Foundations of Ash’ let their melodies shine clearly without being overshadowed by the black metal support.

The album may not be a concept album per se, but there is still a concept woven through it: that of learning from history. The title, and title track, give this away: ‘to divine’ means to learn something, and antiquity loosely means history (antiquarians are to modern historians what alchemists are to modern chemists). The title track states “So we as men must all now learn, This cycle claiming blood, Our future must not be again.” The idea of the album, then, is that its listeners learn from history to ensure humanity rises above its bloody past and into a brighter future. ‘Warrior Herd’ exemplifies this moral lesson most clearly, condemning modern military actions around the world. The lyrics of that song might seem to indicate general approval of soldiers and their actions until this line: “A sinful tribe, the tumult of undone men, The devil’s servants, blindly charging on.” Re-read the lyrics in the context of this line, and the approval becomes almost sarcastic, bitter, and the condemnation of military action is clear. Equally, the song does not address one nation above any others: all military action around the world is thus condemned, as is the reverence with which soldiers can often be treated with. The album is not all bitterness, however. My favourite song, ‘Whisper of the Elements’, is a paean to nature, its lyrics highlighting the power and majesty of nature.

“To Hell I can descend, But mount over the Heavens. On all sides I reach… But all Men know, That I am here eternal.”
Whisper Of The Elements

Overall, the album is perhaps the most beautiful black metal I’ve ever heard, not a word often associated with the genre. Winterfylleth merge the kind of atmosphere and melody more usually heard in post-metal acts with black metal to create music that defiantly transcends both genres into something greater. I certainly have no criticisms to level at The Divination of Antiquity, and if it is indicative of where Winterfylleth are going with their music, I will happily follow along for years to come.