Trending
You are at:Home»Reviews»Metal»Woe – Hope Attrition
By Stuart Wain on February 15, 2017 Metal, Reviews
Band: Woe
Album: Hope Attrition
Record label: Vendetta Records
Release Date: 17 March 2017
Facebook
Purchase/Download
Tracklisting:
1. Unending Call Of Woe
2. No Blood Has Honor
3. A Distant Epitaph
4. The Din Of The Mourning
5. The Ones We Lost
6. Drown Us With Greatness
7. Abject In Defeat

It’s almost tempting to describe Woe as one of USBM’s most underrated acts. Whilst second album Quietly, Undramatically saw the band gain some attention – helped, in part, by mainman Chris Grigg’s withering open letter response to Hunter Hunt-Hendrix’s theory of “transcendental black metal”. [1] Yet arriving as it did – at a time when Wolves In The Throne Room, Liturgy, Nachtmystium, and (especially) Deafheaven were capturing headlines for their relatively unorthodox takes on black metal, and old USBM stalwarts such as Krieg and Absu were releasing excellent albums, it seems that Woe’s own records were overlooked. That follow-up Withdrawal, released in 2013, was an underwhelming, self-conscious take on USBM did not help. And yet, with Hope Attrition, Woe have released one of the most exciting albums of 2017 thus far. Separated from all the drama that was so prevalent a few years ago, the band may gain the attention they deserve.

Put simply, Hope Attrition is superlative. It opens with a fearsome salvo in the form of ‘Unending Call Of Woe’. Beginning with a tension-building tremolo-picked guitar and ominous drums, the anxiety that the opening moments create is almost palpable. When the tension is finally released, with the band launching in to a full-speed charge, there’s a kind of energy and catharsis that is so rare in black metal. This movement between tension and catharsis something they maintain throughout the album, with second track ‘No Blood Has Honor’ being especially strong in its belligerent, almost arrogant manner. Lyrically, the band continue to embrace insignificance and failure in the same way that made Quietly, Undramatically such a vital album. Whilst many metal bands make use of lyrical concepts of emptiness and futility, few do so in the same way as Woe, where the certainty of defeat only adds extra importance to those rare moments of perceived triumph. Negative as it all is, there is something incredibly cathartic contained within these songs, best evidenced in the repeated mantra-cum-accusation of “What could you know about honor?” in ‘No Blood Has Honor’. 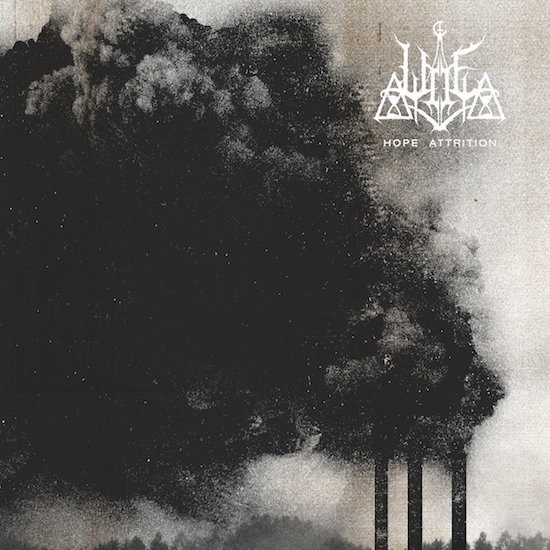 There is something quite subversive about Woe’s take on black metal, and they continue that trend on Hope Attrition. The embracing of futility as a positive; the riffs that owe as much to punk rock as they do to Horna or Weakling; and the rejection of many of the ‘props’ of black metal (no stage names; no corpse paint; no songs about Satan [2]). As much as they may fit in with modern USBM, there’s still the feeling that they’re gently pushing at the boundaries and questioning the core concepts of the genre as much as they embrace them. It all adds up to a band who have a clear sense of their own identity; on Hope Attrition, they sound more comfortable and confident than on any of their previous recordings. That confidence is wedded to the best songs Woe have written to date, with every song feeling like a highlight, but ‘The Ones We Lost’ is especially worthy of praise. A tale of self-doubt, aimless blame, and suffering, it is almost painfully honest and bleak (sample lyric: “I regret every word said / I regret every word unsaid”), and it is all too rare for black metal to be this relentlessly emotional without falling into self-parody.

Of all the bands that drew attention in that fertile period a few years ago, Hope Attrition indicates that Woe are perhaps the most likely to live up to their promise. Arriving now – at a time when Nachmystium’s Blake Judd is best known for his self-destructive drug habit, Krieg’s Neil Jameson has found more fame writing provocative pieces for Decibel than he ever did for his music, and the musical output of Liturgy and Wolves In The Throne Room has abandoned metal altogether – it may be able to gain the attention it deserves. If Ultha‘s Converging Sins [review here] hinted at a new direction that USBM could grow in, Woe demonstrate with Hope Attrition that there’s still plenty to be said for embracing (whilst subtly twisting) the core sound, and playing it with enough passion and talent. This is an emotionally exhausting, musically intense listen, and though it’s still early days, is sure to be one of 2017’s black metal highlights.

[1] Hunter Hunt-Hendrix’s text can be found in this PDF, starting at page 53. Chris Grigg’s response can be read here on Stereogum.

2. Woe’s first couple of releases prior to their début A Spell For The Death Of Man contained some references to Satan, but these have been abandoned in subsequent releases.