Aldershot’s favourite porcine-plectrum-pounders, XII Boar, are back with their second album in two years. Where Pitworthy showed off their tight chemistry and did much to establish them, it was a tad unsure of itself. By contrast, Beyond The Valley Of The Triclops is a double-barrelled blast from their cordite-powered namesake, with an unrelenting pace, groovy, bluesy riffs, and a smattering of sludge to top things off.

Following a hair-raising prologue, ‘Beyond The Valley’ kicks the album off with a menacing bass hook from Adam ‘Baddog’ Thomas which quickly explodes into a stomping guitar riff and from there, the pace does not let up. Vocalist Tommy Hardrocks bellows his way through the songs like a hellish version of the band’s four-legged mascot chasing down its prey. ‘Beyond The Valley’ presents the best guitar work on the album from Dave Wilbraham, though funky outro of ‘Abyssal Lord’ is a very close runner-up.

The album is a solid slab of their self-proclaimed “pure rock and roll for the heavier generation.” [1] This is neatly demonstrated by the skillful interweaving of harmonicas with the melody on ‘The Hustle’, which sounds like it’s been lifted straight out of whatever Deep South dive bar the trio clearly spend their downtime. ‘Abyssal Lord’, on the other hand, weaves sludge-y growls into the vocal lines, giving aggressive weight to the swinging tune, which contains a small riff on the melody from ‘In The Hall Of The Mountain King’. The following track, ‘Black and Blues’ is the most laid-back and bluesy of the songs on the album, slowing the tempo down and letting the vocals stand out in a song about unrequited love between the narrator and a “big black woman”, described as “wrapped in leather round her big black thighs.” The titular ‘Black and Blues’ can be left to the reader’s imagination. 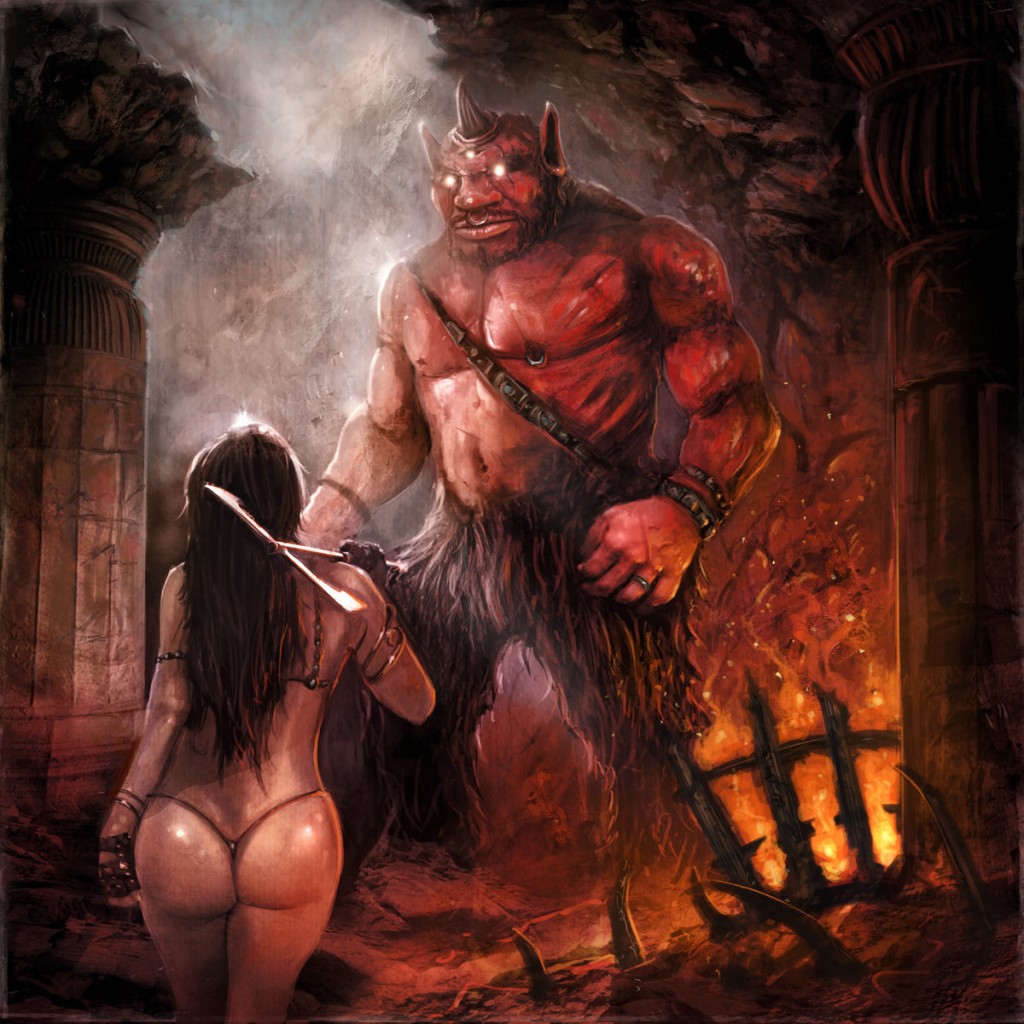 At first glance, listeners could be forgiven for thinking that Beyond the Valley… is a concept album about the defeat of a terrifying fantasy creature, especially given the artwork that features said beast being faced off by a woman wearing very little but carrying a very large axe in the best traditions of contemporary cantasy adventures. This is not wholly the case. That story is threaded through the album with the prologue, title track, ‘Penetrator’ (yes, it’s an extended dick joke made into a song about a fantastical sword), and the closer all focussing on a quest to defeat the monster. ‘Triclops’, it is worth noting, is both a remastered reimagining of the closer from the Smoking Bones EP, benefitting greatly from the heavier, more aggressive sound of Beyond The Valley…, and the origin of the story for the album.

The other songs, however, have nothing to do with that story. This ultimately seems counter-intuitive: if the intent was to do tackle a concept which is sorted in only four songs, a concept EP could have been made instead, which would have allowed for the other songs to stand out more, and might have spurred more variation in style and pace. While the album’s sound is more confident and consistent than Pitworthy, the songs on Beyond the Valley… all tend merge into one big slab of sludgey blues ‘n’ metal, whereas Pitworthy allowed its stronger songs to stand out more by varying styles and length more freely.

While the album has interesting moments, and an imaginative concept spun out of revisiting one of their earlier songs, it does suffer from a lack of variety and from failing to uphold the concept all the way through. It’s still good fun, however, and if they can manage to merge the more confident songwriting with the more varied offerings of Pitworthy [reviewed here] in future, XII Boar will be a musical force to be reckoned with.